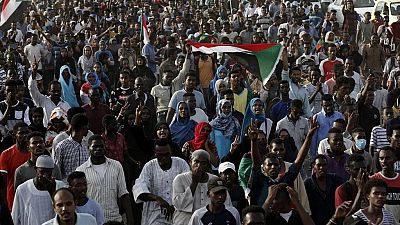 Thousands of Sudanese took to the streets Thursday to condemn the deadly crackdown by security forces last month, as tensions remain high despite recent progress toward a power-sharing deal with the ruling military council.

The Sudanese Professionals’ Association, which has spearheaded months of protests, tweeted that security forces had fired tear gas to disperse some rallies in the capital, Khartoum. There were no reports of serious injuries.

Protesters marched toward the Green Yard, an open area in the capital, waving Sudanese flags and beating drums. They chanted “Revolution!” and “The martyr’s blood shall be avenged!”

If signatories agree tomorrow on giving the military council full immunity, we will go back to the street. The street won’t become quiet until a civilian government is formed and martyrs are avenged.

The military overthrew long-ruling autocrat Omar al-Bashir in April, but the protesters remained in the streets, calling for a swift transition to civilian rule.

On June 3, security forces dispersed their main sit-in, killing at least 128 people, according to protest organizers. Authorities put the death toll at 61, including three security forces.

The pro-democracy movement and the military signed a document Wednesday outlining a power-sharing deal but have yet to agree on the exact division of powers.

They agreed on a Sudanese investigation into last month’s violence, but have yet to outline its scope or agree on whether military leaders would be immune from prosecution.

Those issues are expected to be taken up in talks scheduled for Friday.

“If signatories agree tomorrow on giving the military council full immunity, we will go back to the street,” said Mohamed al-Neel, a 25-year-old protester. “The street won’t become quiet until a civilian government is formed and martyrs are avenged.”