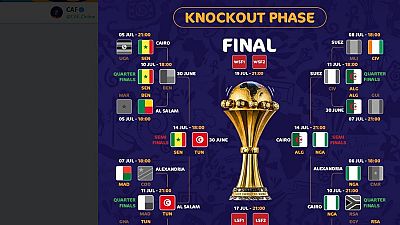 It will be a clash of titans as four of Africa’s biggest football giants play in the semi-finals of the Africa Cup of Nations.

Senegal, who have never won the prestigious prize take on Tunisia in the first semi-final, while Nigeria take on North African side Algeria in the other match.

In this article, we preview the semi-final matches scheduled for Sunday in Egypt’s capital, Cairo.

Senegal, who are seeking their maiden AFCON trophy, defeated Uganda and Benin in the knockout stages before the semis. They also registered victories over Kenya and Tanzania in the group stages, but lost to Algeria.

‘‘We are now close to our goal at this competition, but before it we will face a difficult match against Tunisia,’‘ Senegal coach Aliou Cisse said ahead of the match.

‘‘Tunisian football has evolved, it’s true that we beat them in 2017, but this is a different game.’‘

Tunisia on the other hand registered their first win at the tournament when they knocked out Madagascar in the quarter-finals with a dominant 3-0 win. Before that match, the Eagles had registered draws against Ghana, Mali, Mauritania and Angola.

‘‘I know Senegal’s players very well, but on the pitch it’s something else. We want to continue our adventure at this AFCON,’‘ said Tunisia’s coach, Alain Giresse.

Tunisia and Senegal have previously met five times at AFCON, and have each won a game in those fixtures. The other three games ended in draws.

It will be a clash of champions as Nigeria take on Algeria at the Cairo International Stadium on Sunday.

Nigeria was the first team to qualify for the knockout stages after defeating Burundi and Guinea, before they fell to a shock defeat by Madagascar. The Super Eagles overcame defending champions Cameroon and South Africa in the round of 16 and quarter-finals respectively.

‘‘We know their players very well and they are a very good team. We are playing against a team which everyone believes they were the best in the group stage, so they are the favorites not us,’‘ Nigeria’s coach Gernot Rohr said ahead of Sunday’s match.

Algeria, who are yet to lose a match at this year’s tournament, have defeated Senegal, Kenya, Tanzania, Guinea and Ivory Coast to reach this stage.

‘‘We are ready and will do our best to prepare for the coming game. This is the semifinal so there are no favorites, the chances are equal,’‘ said Algeria’s coach, Djamel Belmadi.

Both teams have met eight times in the history of AFCON, each winning three times and registering two draws.