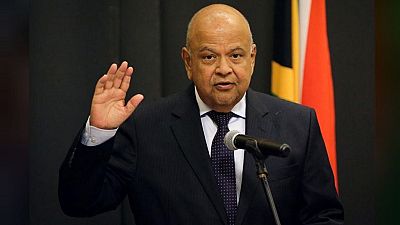 Public Protector Busisiwe Mkhwebane, who investigates alleged wrongdoing by state officials, said that setting up such an intelligence unit was a violation of the constitution.

She also said that by misleading parliament over whether he had met the Guptas, friends of former president Jacob Zuma at the centre of an influence-peddling scandal, Gordhan had violated an executive ethics code.

The allegation that Mr Gordhan during his tenure as the commissioner of SARS established an intelligence unit in violation of the South African intelligence prescripts is substantiated.

The findings are a headache for Ramaphosa, who relies on Gordhan to oversee efforts to revive struggling state-owned companies like power firm Eskom and weapons manufacturer Denel.

Gordhan has a number of political enemies who may see Mkhwebane’s comments as sufficient reason for Ramaphosa to sack him.

Gordhan’s spokesman Adrian Lackay said: “Neither the minister’s office nor anyone in his legal team have received any formal notice, correspondence or report from the public protector about alleged findings announced by her.”

Gordhan is challenging in court another of Mkhwebane’s finding against him. Gordhan’s allies have said that her investigations into the minister are politically motivated, a charge that Mkhwebane denies.

Many foreign investors look favourably on Gordhan, who they feel ran a tight ship when he served as finance minister. Previously, Gordhan headed the South African Revenue Service (SARS) for around a decade from 1999.

“The allegation that Mr Gordhan during his tenure as the commissioner of SARS established an intelligence unit in violation of the South African intelligence prescripts is substantiated,” Mkhwebane said.

“The establishment of the unit with the approval of Mr Gordhan as the erstwhile accounting officer was in breach of section 209 of the constitution.”

A lawmaker for the radical Economic Freedom Fighters (EFF) party, Floyd Shivambu, was among the complainants who urged Mkhwebane to investigate Gordhan for alleged wrongdoing.

The EFF, the country’s second-largest opposition party, has had a long-running public feud with the minister.

Julius Malema has accused President Cyril Ramaphosa of treating Pravin Gordhan like God. He hinted that EFF lawyers would intervene in the matter by taking the president to court to force him to act following the Public Protector’s ruling against Gordhan https://t.co/oDM1BZkmRT pic.twitter.com/q0mVI7KMCA

It is undeniable that Ramaphosa can no longer take a back seat and wait for court findings. He will have to act or face an internal revolt in the ANC over his failure to… https://t.co/1Ppv2DBGEB