Emirates Stadium hosts 'An Evening with Rwanda at Arsenal' 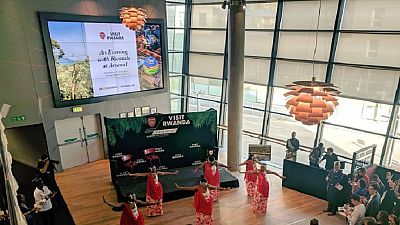 There was Rwandan culture on display, there were Arsenal legends on the high table and a keen audience looking on at an event in London.

Arsenal’s Emirates Stadium hosted a event dubbed “An Evening with Rwanda at Arsenal’ on Thursday night as part of a partnership between the two entities signed last year.

“#VisitRwanda is welcoming partners, investors and friends of Rwanda for an evening of learning, networking and #Rwandan culture and to learn more about the @Arsenal partnership,” the Rwanda Development Board said on Twitter.

At the event, they shared Rwanda's tourism and investment opportunities #VisitRwanda pic.twitter.com/jqkrjBxBlJ

Under the deal signed last year, Rwanda paid the London club $40 million to have Arsenal players wear the “Visit Rwanda” tourist board logo on one sleeve in all competitions.

Tourism is the biggest foreign exchange earner in the East African nation. And the foreign minister said at the time he hoped revenues from the sector would double from more than $400 million last year to $800 million by 2024.

U.N. figures show more than 60 percent of people live under the poverty line in Rwanda, a country of 12 million where 800,000 people were killed in a genocide in 1994.

Arsenal at the time also declined to confirm the value of the sponsorship deal but said Rwanda had “transformed itself dramatically in recent times and is now regarded as one of the most advanced and respected countries in Africa”.