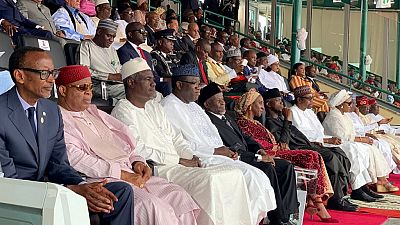 June 12 is officially a national holiday in Nigeria for the celebration of “Democracy Day” in Africa’s most populous country.

A number of African leaders are in the capital Abuja for the inaugural celebration of the day the military handed over power to an elected civilian government back in 1999.

Until June 6, 2019 when President Buhari signed the law that slated the day as “Democracy Day,” May 29 each year had been celebrated for the particular purpose.

African leaders in Abuja according to local media

President Buhari raised eyebrows during his inauguration for a second term which took place on May 29 after he failed to deliver an inaugural speech.

At the time, the official government position was that the ceremony had been done on a low-key without the usual fanfare as the government put more efforts into today’s event.

The president has as expected delivered an address on the occasion of the inaugural commemoration.

The May 29 event had no invited guests and the normal military parades and change of flags were done to symbolize a change of order. Buhari and his vice Yemi Osinbajo took their respective oaths and the event ended.

A history of Nigeria’s Democracy Day – Extract from “The Conversation”

In a piece explaining why June 12 is important to Nigeria, a Political Science lecturer at the Obafemi Awolowo University, Damilola Agbalajobi, wrote for The Conversation.

June 12 carries huge significance for older Nigerians. It was on this date in 1993 that presidential elections were held for the first time since the 1983 military coup. It was an event many observers have described as the most significant in Nigeria’s post-independence political history. It is still viewed as the freest, fairest and most peaceful election ever held in Nigeria.

On the day, an estimated 14 million Nigerians – irrespective of ethnic, religious, class, and regional affiliations, (in a period when religious acrimony and tension had reached its zenith) – defied bad weather to elect their president with the hope of ending eight years of military dictatorships.

The euphoria was short-lived. The results of the election were never released. But unofficial results gathered through the various polling stations by civil society groups across the country indicated broad national support for the presidential candidate of the Social Democratic Party, Chief Moshood Kashimawo Olawale Abiola.

As we celebrate yet another episode of the June 12 struggle, the desire for hope is more preponderant today much as it was twenty-six years ago. So, for all true lovers of democracy, let us keep the HOPE alive.

#June12 was special because for the first time, Nigerians spoke as one by electing MKO Abiola, a man of the people. MBuhari is special because he is the first President to recognize this fact.#June12 is a celebration of #freedom, #unity, #courage & #hope.

May the soul of our Comrades who made Nigeria's Democracy possible, rest well Thousands of unsung Hero's who gave thier life for Nigeria. Names you never read or hear about. Without them, we won't have a #DemocracyDay
Bagauda Kaltho, Ubani, Ogamkpa, Aturu, Oyerinde & others, RIP

As we celebrate #democracyDay, we remember Chief MKO and the many unnamed freedom fighters who gave it all in the struggle for the actualization of the #June12

Special appreciation goes to president MBuhari for standing on the side of history, justice and equity.

On this inaugural celebration of #June12 as #DemocracyDay, we thank H.E MBuhari for rewriting history in celebration of Freedom, Fairness, Equity and Social Justice.

Chief MKO Abiola lives on in our minds and hearts as a hero of Nigeria's democracy.

Now that June 12 has been officially recognised as #DemocracyDay, It is only fair to refer to him as Former President MKO Abiola. The true hero of Democracy. pic.twitter.com/PHinK3M4oU