Ethiopia PM in Sudan to mediate between military, opposition 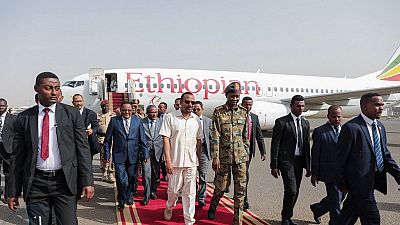 Ethiopia’s prime minister, Abiy Ahmed arrived in the Sudanese capital, Khartoum to mediate between the military and opposition groups that have failed to reach an agreement over a transition authority.

Abiy’s office said he would meet with General Abdel Fattah al-Burhan, the leader of the transitional military council, who was in Ethiopia last week.

The reformist prime minister, who has played mediation roles in South Sudan and the Kenya-Somalia conflict, is also expected to meet leaders of the Declaration of Freedom and Change Forces during his one-day visit.

From negotiations to bloodshed

The Ethiopian initiative follows the worst bloodshed in Sudan since Bashir was ousted by the military after four months of protests against his repressive three-decade rule.

The opposition says 108 people were killed in the storming of a civilian protest camp on Monday and a subsequent wider crackdown. The government put the toll at 61 people, including three security personnel.

The African Union on Thursday suspended Sudan until the establishment of civilian rule, intensifying global pressure on the military leaders to stand down

Both sides had been in talks over a civilian-led transition to democracy. But the already faltering negotiations collapsed in the wake of the crackdown.

Abiy Ahmed, who took office in Ethiopia last year and introduced political and economic reforms, has won wide praise for his diplomacy skills, including brokering peace with his country’s neighbor and long-time foe Eritrea.