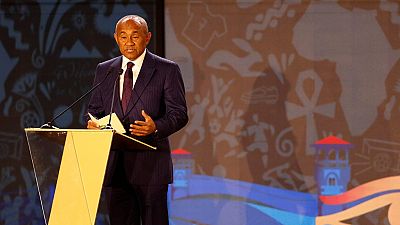 Among the allegations are claims Ahmad forced CAF to buy sportswear through a French company rather than directly from manufacturers and at inflated prices.

“FIFA is unaware of the details surrounding this investigation and is therefore not in a position to make any comment on it specifically,” FIFA said in a statement.

“FIFA is asking the French authorities for any information that might be relevant to investigations taking place within its Ethics Committee.”

Ahmad, a former Malagasy cabinet minister, had been reported last month to FIFA’s ethics committee for alleged corruption and sexual harassment by CAF general secretary Amr Fahmy, who was then fired.

Ahmad Ahmad, the president of the football governing body is trending on social media, following reports that he had been arrested in France on Thursday morning, over allegations of corruption.

Madagascar’s Ahmad, who became president of the Confederation of African Football (CAF) in March 2017, has been dogged by several organisational scandals, during his two years at the helm.

Reports of Ahmad’s arrest were published by French-based pan-African magazine, Jeune Africa, who said the 59-year-old football administrator had been detained at his hotel in Paris, where he was attending the FIFA Congress.

His arrest by the Central Office for the Fight against Corruption and Financial and Tax Offences (Oclif), is reportedly in conection with a contract that CAF terminated with German equipment manufacturer Puma in favor of Technical Steel.

Ahmad is accused of having influenced this decision, standing to be rewarded with up to $830,000. He has denied the allegations.

‘‘All decisions were taken in a collective and transparent manner,” Ahmad said in mid-April.

Reports of Ahmad’s arrest come hardly a day after CAF took a decision to cancel the African Champions League win by Esperance Tunis, and order a replay of the second-leg match against Morocco’s Wydad Casablanca.

The Tunisian club has since denounced Ahmad as incompetent and corrupt, vowing to appeal against the CAF decision with relevant international bodies.

Ahmad was also heavily criticised for the manner in which CAF handled the hosting rights for the 2019 African Nations Cup, which were stripped from Cameroon last year and awarded to current hosts Egypt.

But with Ahmad Ahmad’s arrest and the issue with Wydad and Esperance as well the AFCON !!! This is not good koraaa for Africa ..so not good in many ways ‍♀️??‍♀️??‍♀️

Too much of a coincidence that Ahmad Ahmad has been arrested at the Fifa congress and just hours after announcing a replay of the Caf Champions league final.