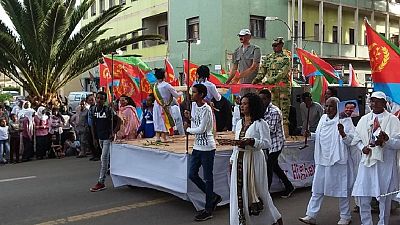 In the lead up to May 24 Independence Day anniversary, several activities are taking place in Eritrea and across the world to mark its 28th anniversary celebration.

Minister of Information Yemane Meskel on Wednesday reported of what he described as a “colourful” street carnival in the capital Asmara as part of the week-long celebrations.

A parade of dispatch riders and a military band, citizens dressed in national colours displaying colourful memorabilia and thousands lined across Asmara’s Martyrs and Liberation Avenues to watch the procession.

A significant guest being US comedienne Tiffany Haddish who arrived in Asmara late last week to join the celebrations. Reports indicate that she had earlier applied for and received Eritrean citizenship.

In other photos making the rounds on social media platform Twitter; there are huge paintings depicting different parts of the country mounted along the roads.

There is also a collection of mannequins with the most catchy being what appears to be president Isaias Afwerki with Ethiopian Prime Minister Abiy Ahmed cutting sod for the reopening of borders last year. All the borders have since been unilaterally shut by Eritrea according to reports.

With the streets free of cars, the camel which is a national symbol of the country also got a say in proceedings as a number of them were paraded with flag carrying young men.