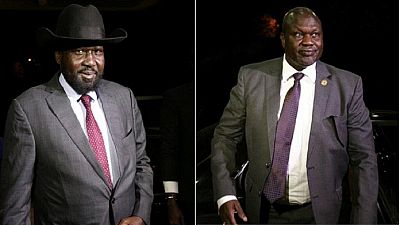 South Sudan’s ruling and opposition parties agreed on Friday to give themselves six more months to form a unity government as part of a peace deal they signed in September, the regional group IGAD said in a statement.

Also on Friday, President Salva Kiir lifted a state of emergency imposed in 2017 in five northern states of the country, South Sudan Radio reported, in a bid to help foster peace.

South Sudan gained independence from Sudan in 2011 but descended into a civil war two years later. After a string of failed agreements, a peace deal was signed last September between the two sides, represented by Kiir and his former deputy turned rival, Riek Machar.

In light of the above, the Parties unanimously agreed to extend the Pre-Transitional period by an additional six (6) months effective from 12th May 2019 to enable the execution of the critical pending tasks.

As part of the peace deal, the two sides aimed to form a national unity government by May 12. The parties met in neighbouring Ethiopia’s capital Addis Ababa on Friday to seek a way forward on the unity government.

“The Parties identified lack of political will, financing and time constraints as the major challenges that have delayed implementation of the Pre-Transitional tasks and underscored the need to ensure that specific pending tasks are adequately funded within a clearly set out and reasonable timeframe,” IGAD said in a statement.

“In light of the above, the Parties unanimously agreed to extend the Pre-Transitional period by an additional six (6) months effective from 12th May 2019 to enable the execution of the critical pending tasks,” the intergovernmental group added.

While the peace deal has helped to reduce fighting and partly alleviated the humanitarian crisis afflicting the country, a U.N. panel of experts on South Sudan said in a report on Tuesday that the country still faces significant challenges.

IGAD, which has been helping to mediate between the two sides, said the new agreement will be presented for consideration at its council of ministers meeting to be held on 7th to 8th May in Juba in South Sudan.