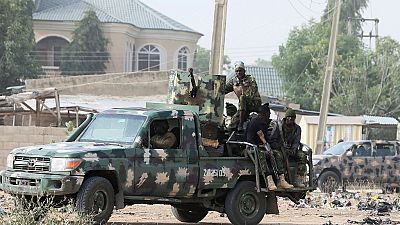 Five soldiers were killed after Boko Haram militants attacked a military base in northeastern Nigeria, military sources reported on Monday.

Members of the Islamic State Group in the West African Province (ISWAP), took the base of Mararrabar Kimba, in Borno State, 135 km from the regional capital, Maiduguri, on Friday. The insurgents seized the weapons before withdrawing, an officer said Saturday.

Three days later, a first assessment shows that at least five people have died and about 30 missing.

“We found five bodies of soldiers who paid the ultimate price in fighting terrorists,” an officer told AFP. “Rescue teams are still looking for about 30 other soldiers who have gone missing since the attack,” he added.

A second officer, who confirmed the death toll of five, added that the army was still hoping that the soldiers who were at large would be found.

“There are high hopes that the missing soldiers will be found – or that they will find their way back,” he hoped: “We don’t think of the worst case scenario.

The Nigerian army has not officially reported on the incident.

According to information gathered from military sources on Saturday, the attackers arrived in a dozen pick-ups equipped with heavy machine guns. They also had three armoured personnel carriers stolen from the security forces. They were accompanied by a group of motorcycle fighters.

After an intense exchange of fire, the soldiers were overwhelmed and a number of them dispersed to escape the better armed Islamists.

More than 27,000 people have died since the beginning of the Boko Haram uprising in northeastern Nigeria in 2009, and 1.8 million others are still unable to return home.

The group also operates in the other countries of the Lake Chad area (Chad, Cameroon, Niger), where it carries out attacks against law enforcement agencies and abductions of civilians.

A coalition of Chadian, Nigerian and Cameroonian forces has been launching an offensive against jihadist concentrations in the region for several weeks.

Nigerian army chief General Tukur Buratai warned last week against regrouping the two factions in Boko Haram to create a jihadist enclave that would extend from northeastern Nigeria to the Lake Chad region.