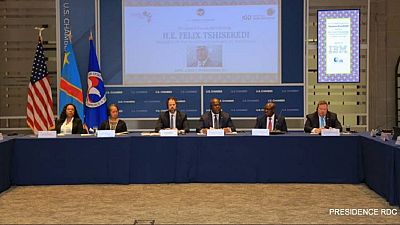 The United States government on Thursday applauded the efforts of president Felix Tshisekedi to drive a ‘change agenda’, pointing out that decisions like the release of political prisoners are promising signs that Democratic Republic of Congo (DRC) can become truly democratic.

It was Tshisekedi’s first visit to the United States since winning Dec. 30 elections, which while marred by widespread accusations of fraud, led to the first transfer of power via the ballot box in the Democratic Republic of Congo.

“They discussed the future of U.S.-DRC relations following the country’s historic transfer of power earlier this year,” the department said in a statement.

They also discussed ways to combat the Ebola outbreak in the country’s eastern region, which has killed more than 600 people, and ways to open the country to U.S. investment, the department added.

Washington has imposed sanctions against senior Congolese elections officials for fraud and corruption in the Dec. 30 vote.

While the sanctions have targeted Congo’s electoral commission chief and advisers, Washington has stopped short of calling into question the legitimacy of Tshisekedi’s victory.

Since his arrival in the United States on Wednesday, Tshisekedi has;

He is also scheduled to meet Congolese living in the United States. It is not clear whether Tshisekedi who took office in January this year, will meet his counterpart, Donald Trump.