AfCFTA agreement to be implemented after Gambia's historic ratification 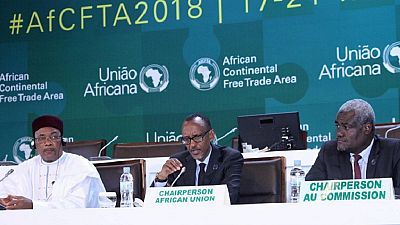 Gambia’s parliament on Tuesday approved the Africa Continental Free Trade Agreement (AfCFTA), becoming the 22nd nation to do so, and effectively meeting the minimum threshold for the agreement to come into force.

The AfCFTA which was enacted last year, seeks to create the largest trade zone in the world, increase intra-African trade by 52% by the year 2022 and remove tariffs on 90% of goods.

African Union’s Commissioner for Trade and Industry, Albert Muchanga led celebrations of the historic achievement, posting on his office Twitter account that ‘the AfCFTA market is ready for launch of its operational phase in July this year’.

A summary of AfCFTA’s progress

1/2 – Good news! The Parliament of The Gambia has APPROVED ratification of #AfCFTA Agreement making us meet the minimum threshold. The AfCFTA market is being born and is one step ready for launch of its operational phase in July this year. AUTradeIndustry _AfricanUnion pic.twitter.com/it2CN1FWA4

Africa made it. With The Gambia ratification endorsed by Parliament it took 1 year for the minimum required number for the #AfCFTA to enter into force. This is an absolute record for these type of agreements. Let us not forget this one is the largest ever by the # of adherents. pic.twitter.com/NdEboXq3HY

Gambia has become the 22nd country to ratify the African Continental Free Trade Area (#AfCFTA), meaning it has entered into force…and the hard part begins. Still, cause to celebrate??????

Ladies and Gentlemen, The Continental Free Trade Agreement aka #AfCFTA is now in force, thanks to a record 22 nations signing on??, with Gambia taking the step in bringing us closer to a more perfect Pan African Union??.

Now EXECUTION – Lets do this Africa, We CAN??. https://t.co/JQIHKihnCe