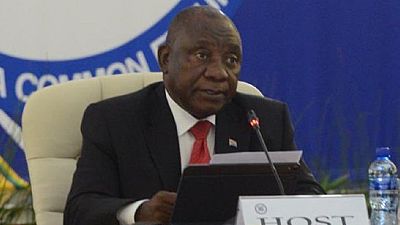 South African president Cyril Ramaphosa has commented on recent reports of xenophobic attacks in part of the country categorically condemning it as unacceptable.

Speaking at a presidential fundraising event on Friday evening, Ramaphosa said the attacks were a sign of intolerance and partly ingratitude for the role that other African countries played directly and indirectly in the long struggle against the apartheid regime.

He stressed that South Africans were tolerant people who had rejected xenophobia and would continue to do so again and again. “I condemn them in the strongest terms because this is not us,” he said to applause.

This is the first time this year that such attacks are being recorded in one of Africa’s most developed nations. In years past, African nationals have been targeted and attacked most of them to death. Their businesses have been looted and properties burnt down in some instances.

Ramaphosa defended African nationals in the latter part of his remarks saying most of them were law abiding and living and working legally in South Africa.

The president’s remarks on xenophobic attacks

Attacks on foreign nationals for whatever reason is a form of intolerance that the people of this country have rejected many times before and must do so again and again and again.

These recent attacks that have been leveled against people from other countries are wrong, they violate everything that our people fought for over many decades and as for me, I condemn them in the strongest terms because this is not us.

We continue to appreciate what our fellow Africans have done for our liberation, because they stood side by side with us as we engaged in struggle. They supported us, willingly in a comradely manner and some of them were as far afield.

Countries like Uganda, countries that were not even our neighbours. They supported us because they felt that racism and apartheid was an abomination against humanity and they joined the struggle.

Gave us refuge, embraced us and supported our struggle in more ways than you can imagine, militarily, resource wise they gave our people a number of skills and so on. We shall never forget the sacrifices that they made and we shall forever be in the debt of many African countries on the continent.

There are a great (number of) foreign nationals in our country who are here legally, who respect our laws and respect our people.

Xenophobia has no place in our democracy and we must do everything to root it out. pic.twitter.com/LA3rW5VHaW