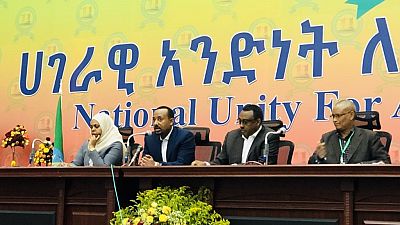 The “RD” in EPRDF denotes Revolutionary and Democracy; these two underline Ethiopia over the last twelve months.

Over the course of this period, the term “reform” and “reformist” has been the choice word for Abiy’s actions and himself respectively. Even opponents will admit that even if not exactly a revolution, Ethiopia has seen an evolution this far.

At the time Abiy took over the reins as EPRDF leader, chances are that even the party could not tell how “fast and furious” he will set out to dismantle the coalition and the country. Breath-taking, unpredictable could be of help.

Experts especially the Crisis Group in its 2019 report titled “Managing Ethiopia’s Unsettled Transition,” said Abiy had successfully managed thus far to wrong foot all opponents with the way he has handled the country – opening, unbundling, demystifying and chasing accountability.

The EPRDF has seen its four main parties hold meetings to tweak its processes at individual levels. Its most prominent gathering was in October 2018 at Hawassa. There, Abiy was re-elected as leader of the coalition.

According to analysts, it was to be expected because even opponents could not at the time find enough grounds to oppose his leadership and more so, Abiy still had the numbers on his side.

The historic 11th EPRDF Congress (that has 180 voting members) today elected Dr Abiy Ahmed as Chairperson and Ato Demeke Mekonnen as Deputy Chairperson in a secret ballot. Dr Abiy Ahmed will lead the ruling party until the next Congress. #Ethiopia #EPRDFcongress pic.twitter.com/8rbY0pwkN1

Abiy also concerned himself with matters in the constituent party he leads, the Oromo Democratic Party, ODP. At a conference last year, he tasked Oromos to do all it takes to safeguard the reforms that were ongoing.

It was at this conference what was once known at the Oromo Peoples Democratic Organization, OPDO, was renamed ODP. Abiy thus heads the ODP, the EPRDF and Ethiopia.

At that conference Abiy led calls for Oromo unity in order to safeguard the reforms that he was undertaking in the interest of the country at large. The Oromos were famed for the anti-government protests that brought Abiy to power.

He was also neck deep in meetings with satellite parties under the EPRDF. Under his leadership, the coalition has made significant concessions for these parties to be more involved in the affairs of the EPRDF.

One of his most controversial interventions was in the Somali Regional State after federal forces were deployed and subsequently arrested long-serving leader of the region, Abdi Mohamoud Illey.

In the absence of any “wild” developments, Abiy is expected to continue in his role as EPRDF leader and by default Prime Minister till Ethiopia holds keenly watched elections in 2020. Abiy has promised it will be a free, fair and credible vote.

More than once, he has stressed his resolve to make it an above board process and has explicitly said he will hand over power if the coalition were to lose to an opposition party.

Most of these parties have been welcomed back home from exile. From rebel groups in next door Eritrea to others in the United States.

He has appointed a former judge and opponent of the EPRDF as elections head. Birtukan Mideksa is expected to spearhead the processes leading to, oversee the vote and issues that could arise therefrom by way of contestations.

Political watchers are predicting a political engineering process that could likely make the elections national in nature, rather than based on the existing regional process.

Whether there would be enough time between now and 2020 for such legislation and agreements to be reached remains another issue. Whether at all the polls will hold is also widely speculated, either way Abiy’s footprints is clear.