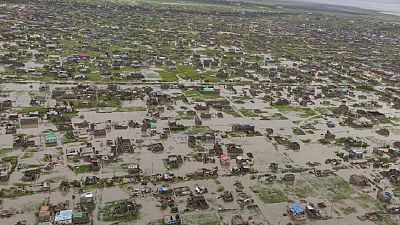 The death toll in Mozambique has climbed to 417 after a cyclone devastated swathes of the southern African country, flooding thousands of square kilometres, the government said on Saturday.

Mozambique Lands and Environment Minister Celso Correia told reporters in the port city of Beira that 417 deaths have been recorded at this time.

Cyclone Idai smashed into the coast of central Mozambique on Friday last week, unleashing hurricane-force winds and rains that flooded the hinterland and drenched eastern Zimbabwe.

(The health situation) is still critical, but its getting better. We have good news about the recovery of conditions.

“(The health situation) is still critical, but its getting better. We have good news about the recovery of conditions to work on the ground but unfortunately the number of deaths are increasing. We have now 417 people that lost their lives and we have 1517 injured people. We are saving a lot of lives as well, “ Correia said.

According to him, the count now is around 89,000 people in the camps. Adding that they are still working on the ground. He noted that all numbers are preliminary and that they will be assessing, continue to assess the impact but the main focus now is to keep on saving people’s lives.

“This is one of the main challenges in the next week so we put it up health operation centres so that we can prevent malaria, diarrhoea, cholera and we are also planning to put vaccines for the kids. So, we are trying everything to avoid inclusions of those diseases on the ground but the challenges are huge because there is a lot of water on the ground,” Correia said.

Nearly 90 000 Mozambicans have been moved into shelters, while thousands of others are still stranded in floodwaters.

The government estimates that around one million people have been affected by the storm.