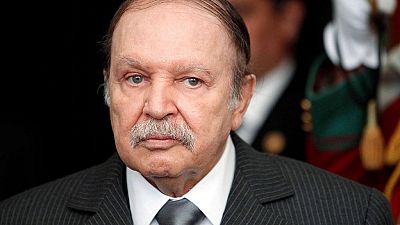 Algerian President Abdelaziz Bouteflika has changed his campaign manager for an April election in which he is expected to seek a fifth term, state news agency APS said on Saturday.

News of Abdelghani Zaalane’s appointment came a day after tens of thousands of Algerians protested against a further presidential term for the 82-year-old, who is in Switzerland for medical checks. Zaalane is a minister.

APS did give any reason for Bouteflika’s decision to replace his previous campaign manager Abdelmalek Sellal, who had said on Tuesday that the president would submit official election papers on Sunday, the deadline for candidates.

Opponents say Bouteflika, who suffered a stroke in 2013 and has been seen in public only a few times since, is no longer fit to lead the North African country, a major oil and gas producer.

But in a sign of weakness to mount a challenge against the ruling National Liberation Front (FLN), an umbrella group of opposition parties again called on Bouteflika to quit but did not nominate a single candidate.

Friday saw the largest turnout to date in Algeria’s biggest anti-government demonstrations since the Arab Spring eight years ago. Bouteflika has not directly addressed the protests.

Like most of the country’s elite made up of FLN leaders, military officers and business tycoons, Bouteflika is a veteran of Algeria’s 1954-1962 independence war against France. He has been in power since 1999.

The authorities said last week he would travel to Geneva for unspecified “routine” medical checks.

Algerian media did not report on his trip but Swiss public television said late on Saturday that Bouteflika remained at Geneva University Hospital.

A total of 183 people were injured during Friday’s protests across Algeria and one person died of a heart attack, APS said.

The capital Algiers was quiet on Saturday with shops open.

Large-scale demonstrations — rarely seen in Algeria with its ubiquitous security services — against Bouteflika’s re-election move began a week ago and have grown in size.

Many Algerians avoided public political activity for years, fearing trouble from the security services or disillusioned with the war veterans who have run the country since independence.

After a decade-long Islamist insurgency that Bouteflika stamped out early in his rule, Algerians have often tolerated a political system with little space for dissent as a price to pay for peace and stability.