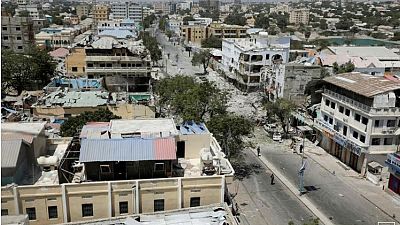 Heavy gunfire rang out across central Mogadishu on Friday as Somali special forces battled to dislodge insurgents holed up next to a hotel they bombed the previous evening,killing 30.

Islamist al Shabaab fighters set off a bomb outside the Hotel Maka Al-Mukarama on Thursday night before retreating to an adjacent building, from where they fired on soldiers who tried to enter. Another bomb exploded later about 1 kilometre (0.6 miles) away.

Rescuers said the number of dead from the first explosion, which destroyed several buildings, could well rise.

The attack, on a hotel popular with government officials, is part of a pattern of Al Shabaab assaults on high-profile targets in East Africa. It comes days after U.S. forces in Somalia stepped up air strikes against the group, which is fighting to dislodge a Western-backed government protected by peacekeepers.

“The militants are still fighting from inside a civilian house adjacent to the hotel,” police officer Major Musa Ali told Reuters on Friday morning. “… (They) are fighting back with grenades and Kalashnikov (rifles).”

He said 29 people, mostly civilians, had died in the attack and its aftermath, and 80 had been wounded.

Authorities deployed a contingent of U.S.-trained Somali troops known as the Alpha Group to try to flush out the militants on Friday, just after two wounded soldiers were carried away from the hotel.

The hotel attack, unusually for Somalia, began at night, and rescuers had no lights or equipment to help dig the wounded out from the rubble, said Abdikadir Adem, the director of the privately-run Aamin ambulance service.

“The scene is fearful … in magnitude it is similar to the October 14 bombing,” he said, referring to a truck bomb that killed more than 500 people in the city in 2017.