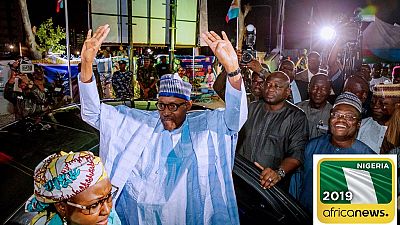 US statement on polls

The United States on Thursday congratulated Nigerians upon a ‘successful vote’ that handed president Muhammadu Buhari a second term.

“We commend all those Nigerians who participated peacefully in the election and condemn those whose acts of violence harmed Nigerians and the electoral process,” Secretary of State Mike Pompeo said in a statement.

“We note the assessments of international and domestic observer missions affirming the overall credibility of the election, despite localized violence and irregularities.”

Leading civil society election monitor YIAGA Africa, which has US and British backing, said “the announced election results reflect the votes cast,” even if there were problems.

The United States has built political and economic relations with Nigeria since the restoration of democracy 20 years ago and in recent years has been especially involved in supporting its fight against Boko Haram jihadists.

President-elect Muhammadu Buhari has called on his supporters not to gloat or humiliate the opposition, offering an ‘inclusive government’ to his defeated opponents.

“We will continue to engage all parties. Our government will remain inclusive and our doors will remain open,” he said while receiving his election certificate.

The supporters of the main parties, Buhari’s All Progressives Congress (APC) and Atiku Abubakar’s People’s Democratic Party (PDP), have often clashed over their candidates records on human rights, corruption and democracy.

Buhari also said his government would reform the economy, combat graft and improve security during his second term.

Atiku to challenge results in court

“It is clear that there were manifest and premeditated malpractices in many states which negate the results announced,” Atiku said in a statement.

Atiku said he would challenge the outcome in court.

“I hereby reject the result of the February 23, 2019 sham election and will be challenging it in court.”

Kenya’s president, Uhuru Kenyatta on Wednesday congratulated his counterpart Muhammadu Buhari upon his victory in the Nigerian presidential elections.*

In a tweet posted on his official account, Kenyatta lauded praises on Buhari for earning the trust of his people.

‘‘Your victory is a clear demonstration of the trust and confidence the people of Nigeria have in your ability to lead the country to greater heights of progress,’‘ read part of the tweet.

Congratulations H.E. MBuhari on your re-election for a second term as the President of the Federal Republic of Nigeria. Your victory is a clear demonstration of the trust and confidence the people of Nigeria have in your ability to lead the country to greater heights of progress

Buhari relishes opportunity to do more

Buhari’s re-election was confirmed on Tuesday night, after the Independent National Electoral Commission (INEC) announced that Buhari had secured a total of 15,191,847 votes to secure victory.

“The new administration will intensify its efforts in security, restructuring the economy and fighting corruption,” Buhari said after the electoral commission declared him the winner.

A message on Buhari’s Twitter feed showed a picture of him waving to supporters and the message “4+4” to mark his second four-year term.

“One good term deserves another,” said one of Buhari’s campaign billboards.

Despite the travails of his first term, it looks like enough voters agreed with that message.