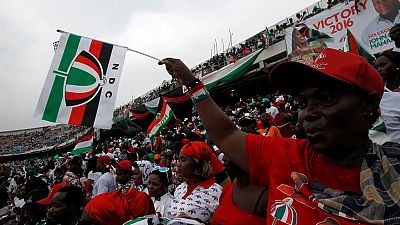 Chairman of Ghana’s largest opposition party, the National Democratic Congress, NDC; has been invited by the police over a leaked tape that has dominated news headlines in the West African country.

On the said tape, Samuel Ofosu-Ampofo is allegedly heard talking about how the party was planning to use a series of politically motivated kidnappings ahead of polls planned for 2020.

In a letter dated February 27, 2019; the Criminal Investigations Department, CID, at the Police Headquarters said it had Ofosu-Ampofo: “in respect of a tape the police had intercepted on GhanaWeb – a popular news portal and other radio stations.

“He is to report at the CID Headquarters tomorrow Thursday at 10:00am,” the statement signed by Assistant Commissioner of Police David Eklu, head of police Public Relations added.

The party has meanwhiles rejected the content of the tape as doctored even though the chairman has yet to directly respond to it.

Ghana, one of West Africa’s most stable democracies was recently rocked by electoral violence leading the president to constitute a body to probe the bloody disturbances at the Ayawaso West Wuogon Constituency located in the heart of the capital.

Even as the commission continues its hearing, Ghanaians are united on the need to root out vigilantism in the country’s politics.

The NDC and ruling New Patriotic Party, NPP, have both been complicit in forming party security who have often been deployed to unleash violence during polls.