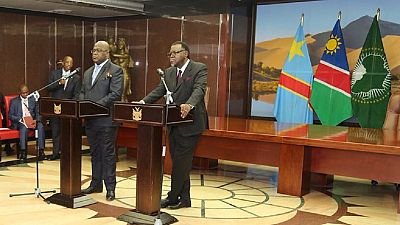 President Felix Tshisekedi arrived in Namibia on Tuesday for an official visit. The president held a press briefing with his host, Hage Geingob, addressing a plethora of issues from corruption, human rights, peace and security back home.

According to Tshisekedi who has been in office a little over a month: “For me, it’s an honour to be in Namibia,” stressing that he was visiting to seek support in maintaining peace in Congo.

He said Namibia as a brother in the Southern Africa Development Community, SADC, bloc was key to helping restore durable peace in his country in line with the general dream aimed at achieving a peaceful and developed continent.

On the subject of corruption, he reiterated that it remained one of the central planks of his administration and that he was going to employ all democratic means to ensure it was in his words, eradicated.

President Geingob and First Lady Monica Geingos hosted this evening an official dinner for His Excellency Félix Tshisekedi Tshilombo and his delegation at State House. The two leaders agreed to further deepen cooperation between the two countries. pic.twitter.com/1s4fIiQRym

He refused however to de drawn into commenting on human rights situation under his predecessor, Joseph Kabila. He said there was no link between the two eras as he was using democratic means to address existing issues.

He cited the arrest of military generals alleged to have ordered the shooting of students days after his investiture. He also cited the incidence of an accommodating state media – that today gives coverage to opposition activities unlike in the past.

Tshisekedi was declared winner of contested December 30, 2018 presidential polls. His victory was affirmed by the top court which dismissed a petition by the leading candidate, Martin Fayulu.

Kabila handed over to Tshisekedi on January 24, the first peaceful transfer of power since the DRC gained independence from Belgium in 1960. Namibia is the second country in the region he has visited.

His first foreign trips saw him visit, Angola then to Kenya and then the Republic of Congo. He also joined colleague heads of state at the 32nd African Union summit in Addis Ababa earlier this month.