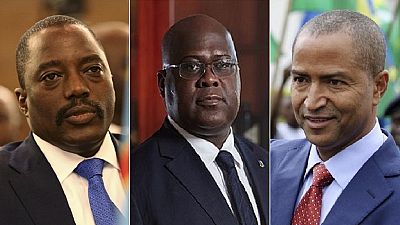 Ensemble pour le Changement, known as Ensemble, a political opposition party in the Democratic Republic of Congo, DRC, have spoken about developments in the country after the December 2018 elections.

The party led by Moise Katumbi – a former governor and barred aspirant in the elections released a February 26, 2019 statement that touched on diverse areas of the polity.

The issues raised in the 14-point release touched on the election and its outcome, what it said was an ungodly alliance between President Tshisekedi and his predecessor Joseph Kabila and the need for Congolese to not lose hope and keep up the fight for a better nation.

Whiles seemingly accepting the presidency of Tshisekedi despite its concerns, Ensemble stressed that it was important for Kabila to desist from interference from the affairs of the country and obstructing the implementation of democratic structures.

Ensemble reported having 66 national parliamentarians and 97 in provincial assemblies, a situation that makes it the main opposition party in the National Assembly. It said it was going to use members to keep government in check and seek the best interest of Congolese.

Emsemble: remains open to any initiative going in the direction of settling the serious political crisis that has plagued the country, the statement added.

They tasked the president to ensure the liberation of persons detained over their politics and to give orders for the return of exiled politicians citing its leader Moise Katumbi and ex-veep Jean-Pierre Bemba.

Ensemble along with four other parties presented a common presidential candidate in Martin Fayulu at the polls. Despite observers and the Catholic Church tallies showing that he won the polls, the elections body insisted that he came second behind Tshisekedi – a claim the courts agreed with.

With regard to the future of Lamuka, we invite its main leaders and their respective organizations to proceed as soon as possible to an evaluation of the action taken and to decide on its new orientation, the statement added.

Just as the former ruling coalition, Common Forum for Congo, FCC; last week pledged full allegiance to Joseph Kabila, Ensemble also pledged same to Katumbi, a former ally of Kabila who turned archenemy – he was denied return to Congo after self imposed exile.

He had attempted to return home to contest in the polls – he was denied entry the airspace before authorities thwarted a bid to enter via the border with Zambia, he was locked out at border town of Kasumbalesa.