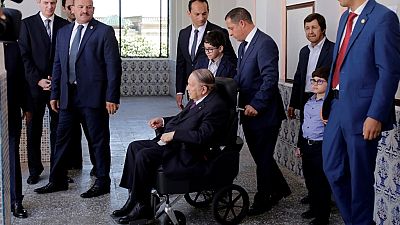 Ahead of Algeria’s presidential elections in April, president Abdelaziz Bouteflika, who is seeking a fifth term in April elections, will head to Switzerland for “routine medical checks”, his office said Thursday.

The 81-year-old will have a “short” stay in Geneva, it said in a statement carried by the government APS news agency.

In power since 1999, Bouteflika has used a wheelchair and has rarely been seen in public since suffering a stroke in 2013.

Of course, I am no longer the same physical force as before.

Bouteflika spent 80 days in hospital in Paris following his 2013 stroke, which affected his mobility and speech.

He last appeared in public on November 1 and no longer delivers public speeches, fuelling constant speculation on his health.

He did however appear on television on Thursday, alongside other senior officials attending the swearing-in of the new president of the Constitutional Council president Tayeb Belaiz.

On February 10 Bouteflika announced he would seek a fifth term in April elections, in a message published by state media, after he was endorsed by his party and the ruling coalition.

“Of course, I am no longer the same physical force as before — something that I have never hidden from the people,” the statement read.

“But the unwavering desire to serve… has never left me and it allows me to transcend the constraints linked to health troubles which everyone may one day face.”

Last weekend Algerians held rallies against his fifth mandate, and social media users have called for Friday demonstrations to oppose his candidacy.