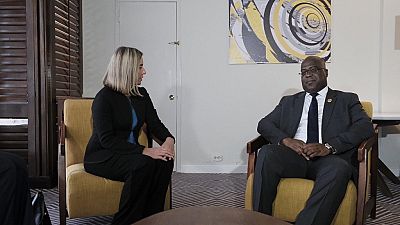 President Felix Tshisekedi on Friday met with the diplomatic corps at an event where he stressed that the Democratic Republic of Congo, DRC, under his tenure will do all it takes to protect its political independence.

His address also touched on how the new DRC was pushing for partnerships founded on respect, mutual cooperation and total defense of its territorial integrity.

Tshisekedi is reported to have called on the European Union to lift sanctions imposed on over a dozen officials of the former government led by Joseph Kabila. The sanctions were renewed with days to the December 30, 2018 elections.

But an RFI journalist who covers the DRC noted in a tweet that the president did not verbally make the call in his address but that it was contained in a speech that was made available to the press.

His first meeting as president with the European Union was in Addis Ababa during the 32nd African Union heads of state summit where he met with EU Foreign Affairs chief, Federica Mogherini.

The subject of sanctions lifting was important as DRC went to the polls. Kabila’s preferred candidate, Emmanuel Ramazani Shadary was included on the sanctions list for his role in suppressing protests when he was Interior Minister.

The AU in July 2017 made a strong case for the lifting of sanctions but it failed to achieve the results. Days to the December elections, Kinshasa sacked the EU envoy in what it said was a retaliatory measure.

Then candidate Tshisekedi vowed that soon as he became president, he will ensure the return of Ambassador Bart Ouvry to the country.

The president also said he had given orders for Congo to expedite talks with the EU with respect to establishing an equal nature of diplomatic presence.