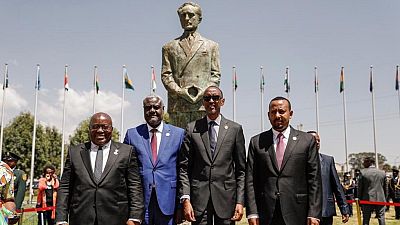 The African Union, AU, over the weekend unveiled a statue of Ethiopia’s last emperor at the premises of its headquarters in the capital Addis Ababa.

The statue was in recognition of the efforts of His Imperial Majesty, HIM, Haile Selassie in the formation of the then Organization of African Unity, OAU, which was later rechristened as AU.

The presidents and other representatives of government had gathered in Addis Ababa for the 32nd edition of AU heads of states summit.

Aside his efforts at home across the continent and fame spanning different continents, Haile Selassie is revered as a god by followers of Rastafarianism. The group still has a big presence in Ethiopia till date.

1. Full name Ras Tafari Makonnen he was born on July 23, 1892.
2. He was the last emperor of Ethiopia with his reign spanning from 1930 to 1974. He had previously served as regent between 1916 and 1930.
3. Long before African countries got independence, he led Ethiopia in the 1940s to become a charter member of the United Nations – Ethiopia remains the only African country that was not colonized.
4. Haile Selassie was a strong champion of the Orgnaization of African Unity (OAU) hosting its first meeting in Addis Ababa in 1963.
5. His statue is the second to be erected at the premises of the AU. The first being that of Ghana’s first president Osagyefo Dr. Kwame Nkrumah.
6. The statue was put together by Ethiopian sculptor, Bekele Mekonnen.
7. A quote under the statue reads: “Today, we look to the future calmly, ….and courage. We look to the vision of an Africa no merely free but united…. History teaches us that unity is strength.” – H.I.M. Haile Selasie I, May 25 1963.
8. He former Emperor is referred to as the Lion of Judah and Messiah by the Rastafari. Rastafarianism is a religious cult based on a belief that Ras Tafari (Haile Selassie) is the Messiah and that Africa (especially Ethiopia) is the Promised Land.
9. He is credited with the idea of the United States of Africa in 1964, ex-Libyan leader Muammar Gaddafi years on championed the same cause.
10. He died aged 83 in August 27, 1975 after he had been overthrown and was held in detention. His burial took place in November 2000 at the Holy Trinity Cathedral in Addis Ababa. He was given a burial by the Ethiopian Orthodox Church which he belonged to all his life.

Kwame Nkurumah’s statue and the newly inaugurated one of #Haileselassie I- the founders of the OAU now _AfricanUnion #AUSummit2019 pic.twitter.com/rhhSfuAKnF