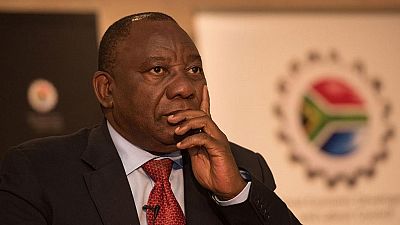 The land reform dear to South African President Cyril Ramaphosa is not only of concern to white farmers. As large landowners, mining groups are also afraid of paying the price of a massive and unbridled redistribution of land.

South African mines, which have long been at the forefront of the economy, have been in slow decline for years, suffering from falling commodity prices and rising production costs.

In this difficult context, the government’s desire to accelerate the redistribution of land to the black majority in the country, to correct the inequalities inherited from apartheid, has chilled the entire sector.

There will be no seizures of mines or agricultural properties. All this is first and foremost politics.

Three months ago, the CEO of the giant Anglo American made the terms of the debate very clear. If ownership of mining lands is not guaranteed, he said, investors will flee.

“We must find sustainable and inclusive solutions,” said Mark Cutifani, “South Africa’s willingness to boost foreign investment on its soil can only be met if the government details its plan on land in detail.

The rating agency Moody’s, which has placed South Africa under close scrutiny, shares its concern.

“Uncertainty continues to limit short-term investment,” she warned in June. “If reform were to prove costly for companies, the decline in investment would be even more pronounced.”

Determined to involve foreign companies in the recovery of its economy, Cyril Ramaphosa received the strong and clear message. So he took advantage of his big annual raid this week in Cape Town to try to reassure the mining sector.

“Investors should not be afraid, their property will not be taken from them,” he promised.

Land reform, he recalled again this week, aims to “repair (…) the original sin committed against Black South Africans during colonization and apartheid”.

A quarter of a century after the fall of the white racist regime, three-quarters of the country’s agricultural land is still in the hands of the white community, which represents only 8% of its 55 million inhabitants.

Still under discussion in Parliament, the expropriation without compensation project has already had its first effect.

On the ground, it has exacerbated the struggle of local populations against mining companies to oppose the expansion of their activities, reclaim their land or, failing that, enjoy a (small) share of their profits.

“The mine affects our lives because we no longer have land,” says Milicent Shungube, spokesperson for the community of Emalahleni (north), in conflict with the Glencore mining group.

“We tried to get them to leave, but to no avail,” he continues. “So we’d like to enjoy it. They make billions of dollars in profits, but we don’t see anything of it.”

Last year, however, the justice system required Mines Minister Gwede Mantashe to consult with the community of Xolobeni (southeast) before granting a permit to the Australian company Transworld Energy and Mineral Resources (TEM). A rare victory for the people.

Land reform is a political tool

However, industry experts do not expect a flood of decisions against the mining industry.

“There will be no seizures” of mines or agricultural properties, anticipates Amaka Anku, from the Eurasia analysis centre, “all this is first and foremost politics”.

The parliamentary elections of 8 May in sight, the intentions of the Head of State did not escape his rivals.

In particular that of the radical left Julius Malema, whose red-bereed supporters have increased their “wild” land occupations in recent years. Cyril Ramaphosa “plagiarizes our program”, he had more fun on Thursday.

“It would make no economic sense (for the president) to attack productive land,” insists analyst Amaka Anku.

During his state of the nation speech on Thursday, the head of state cautiously stated that the first redistribution operations would target “state-owned plots”, particularly in urban areas.

“Strong statements,” says Sanisha Packirisamy, an analyst with Momentum. “There is more certainty now in the mining sector, but the land issue may still deter some investors.

The companies, on the other hand, seem ready to play the game. If the balance between justice and development is maintained.

“The industry recognizes the need for progress on the land issue,” summarizes South African Chamber of Mines spokesperson Charmane Russell, “we hope this will be done in a way that does not affect investor confidence.