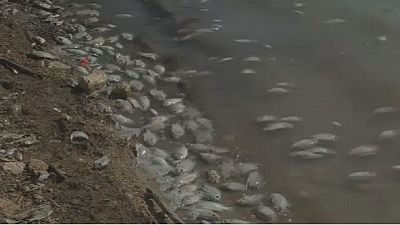 Toxic marine fungi have been killing off scores of freshwater fish in Libya’s Wadi Kaam lake, located east of Tripoli, due to high levels of pollution, record-low temperatures and over-population.

Scientists at the Asmaria Islamic University in the nearby town of Zliten have been running tests on fishes that have been washed up on the lake shore.

“The problem is that there are mass deaths of fish here in the Wadi Kaam lake in massive numbers. After running tests and doing an initial inspection at the university, the reason for these mass deaths is a kind of fungi, called water fungi, that infect the fish. This kind of fungus also multiplies in low temperatures,” the Chair of Environmental Sciences Department, Ali Okasha said.

It is truly shameful that we can have all this beauty and nature, only to destroy it and neglect it. This is truly awful and needs to change.

This specific mould attaches to the gills of the fish, obstructing their breathing. It appears mainly in low temperatures.

According to the lead scientist investigating the cause of the fish dying, their massive numbers could pollute the lake.

“As you can see, the problem is the deaths in massive numbers of living creatures, the fish, whether it’s the Carp, Tilapia or other types of fish that inhabit this lake. This surely has an effect on nature and it is possible that the decomposition of the fish will lead to more pollution of the water,” he said.

Back at the university lab, he and a team have run tests on the dead fish, dissecting them and trying to further analyse their deaths.

“It is truly shameful that we can have all this beauty and nature, only to destroy it and neglect it. This is truly awful and needs to change,” Okasha added.

Okasha does not recommend consuming fish from the lake in large quantities, even though he is yet to prove that the mould is harmful to humans.

“We do not claim that this fungus is harmful to humans. However, we do warn against increased consumption of fish from this lake, namely because it is certainly filled with heavy minerals and other toxins,” Okasha explained.

The Wadi Kaam lake was once a summer getaway attracting both tourists and locals.

It lies next to a large dam and is made purely of rain water.