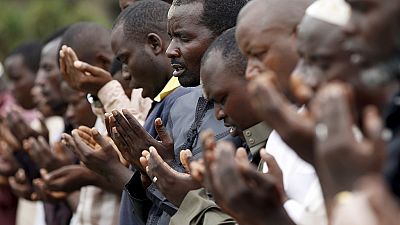 Liberia has become the latest African nation to resort to prayer to resolve hardships, following a call by the President George Weah’s religious advisor asking the nation to pray for God’s intervention in reviving the ailing economy.

Rev. M. Emmanuel Nimely tasked Liberians to pray for two hours everyday, and take part in all-night prayer vigils to be held on every last Friday of every month.

Praying for the economy in Liberia

The calls for prayer to resolve economic problems have received mixed reactions, with critics asking Weah and his government to work hard rather than rely on spiritual deliverance, while others insist that prayer is a correct strategy for nation building.

The Economic Freedom Fighters Chapter in Liberia urged citizens to defy the call for prayer, arguing that Weah needs to resolve the issues of corruption and bad governance that have dogged his government.

“Look at the shameful thing they’re telling us to do as a country, that we must now get on our knees to pray for the success of the nation. No nation will survive, no nation will develop by getting on their knees to pray,” said Emmanuel Gonquoi, commander-in-chief of the EFFL.

George Weah (a talented footballer that gets to the top through hardwork and dedication) as President is asking Liberians to pray for the economy to get better. His presidency is unraveling and we are watching. One year in office, Not as great a president as a footballer

Liberia is not the first African country to resort to spiritual intervention in times of national hardship. Several other governments have asked their citizens to pray for God’s intervention in health, social and agricultural issues.

Last year, at the height of a drought in the South African city of Cape Town, the government’s department of water and sanitation rallied citizens to pray for rain.

A banner on the department’s website read ‘PRAY FOR RAIN: Team South Africa is called upon to pray or meditate for much needed rain during the weekend of 9 – 11 February, 2018.’

Beyond prayer, Capetonians were urged to use available water responsibly to avoid the dreaded ‘Day Zero’, when taps were expected to dry up.

Zambians pray and fast against cholera

In 2018, Zambia’s minister of Religion and National Guidance, Hon. Reverend Godfridah Sumaili declared one week of prayer and fasting, urging citizens to ask for God’s intervention in a cholera epidemic.

Sumaili warned that every Zambian must observe the fasting period which was scheduled to last from January 15th to January 22nd to “Kick out Cholera from the Land.”

“The President urges the faith community and all Malawians to pray for good rains and a productive season this Friday, Saturday and Sunday,” read a statement from the presidency.

The call was made as the country’s staple maize crop was facing dire threats from a dry spell and a worsening pest infestation.

In 2017, Morocco’s King Mohammed VI issued a royal decree asking Moroccans “to implore the Almighty to spread his benevolent rains on the earth”.

All mosques in the country were instructed to lead prayers for rain on Fridays, as the lack of rainfall threatened the country’s agricultural yields.