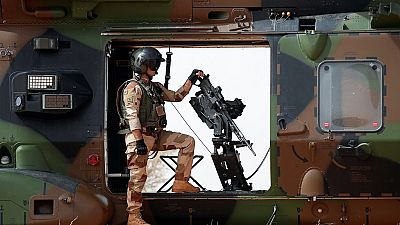 French fighter jets struck targets in northern Chad on Sunday in support of local troops trying to repel a convoy of unidentified fighters that had crossed the border from Libya, the French military said on Monday.

The strikes could be the first official backing by Paris of President Idriss Deby as he looks to quell a fledgling rebel movement, the Military Command Council for the Salvation of the Republic (CCMSR), that seeks to overthrow him.

The statement did not say who was behind the incursion, but it was the first time French forces have hit targets in support of Chadian troops since the CCMSR movement based in southern Libya increased its activities last year.

Deby remains the most viable and solid partner in the region and the Chadians are counting on France for the Libyan border.

“A Mirage 2000 patrol of the French armed forces intervened jointly with the Chadian army in northern Chad to strike a column of 40 pickups of an armed group from Libya infiltrating deep into Chadian territory,” the armed forces said on Monday.

“This intervention at the request of Chadian authorities helped hinder this hostile advance and disperse the column.”

France considers its former colony as vital in the fight against Islamist militants in West Africa and the headquarters of its 4,500-strong counter-terrorism Operation Barkhane force is in the Chadian capital N’djamena. The United States also has a base in the city.

Deby has deployed thousands of battled-hardened troops to face threats from groups with links to al Qaeda and Islamic State, which operate across the lawless, semi-arid Sahel band, and from Nigeria-based Boko Haram militants.

“Deby remains the most viable and solid partner in the region and the Chadians are counting on France for the Libyan border,” a French military source said.

However, Deby’s efforts have strained N’Djamena’s military and hit the oil-dependent economy, which has in turn led to growing internal dissatisfaction.

Deby, who closed the Libyan border last year, has faced several rebellions since coming to power in 1990 at the head of an insurrection that toppled then president Hissene Habre, but there has been relative calm since 2009.

The CCMSR, which says it has 4,500 fighters, was founded in 2014 and its ranks include former rebels from the Darfur region of neighbouring Sudan and former political allies of ex-president Habre.

Deby, a taciturn French-trained ex-fighter pilot who only survived a rebel attack on his presidential palace in 2008 thanks to support from Paris, has won election five times since coming to power.