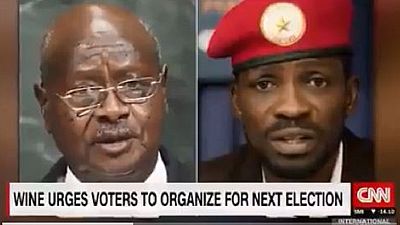 Lawmaker and musician Robert Kyagulanyi also known as Bobi Wine has confirmed that he could likely challenge the sitting president when next presidential polls are held.

“We have many Ugandans registered as voters and overwhelming Museveni lokks like our only way out,” Bobi Wine who is on an international tour told the US-channel, CNN..

Asked if he saw himself challenging the long serving president, he responded: “Well, this story has come up so many times, and so many people have come up to me calling for me to stand.

“We have been discussing this with my team and I must say we (I and my team) are seriously considering challenging President Museveni in the next presidential elections.

The last presidential elections in the East African country was in 2016 with Museveni beating the main opposition leader Kizza Besigye. Museveni by virtue of his age would have been ineligible when polls are next held.

Parliament voted to lift the age-limit in a heated debate and chaotic vote that was stiffly opposed by the opposition.

Lawmakers in December 2017 extended the terms of office for the president and the parliament from five years to seven years. The extension will take effect with the ongoing tenures which started in 2016 and is expected to end in 2023 instead of 2021.

Another big change that was passed into law relative to the presidency was the restoration of two-term limit. It effectively means that Museveni can have two more shots at the presidency staring from the next elections in 2023.

Bobi Wine, whose red beret People Power movement gave the Ugandan government a hard time through 2018. The movement continued its march to what it said is “freedom” from the Yoweri Museveni-led government.