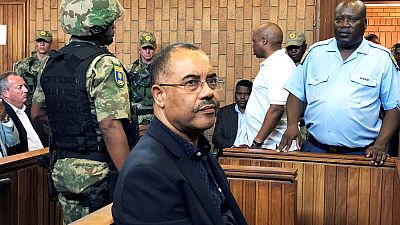 The Mozambican parliament on Tuesday lifted the immunity of former finance minister and serving MP Manuel Chang, held in South Africa since December under an international arrest warrant issued by the US.

Chang, 63, was arrested at Johannesburg airport on December 29 on a US extradition request for his alleged involvement in $2 billion of fraudulent loans to state firms.

Facing extradition requests from both the US and his home country, Chang has enjoyed automatic immunity as a lawmaker.

We have deliberated in favour of the request but the Supreme Court knows what to do.

The request to withdraw immunity was initiated by the Mozambican attorney general’s office and the Supreme Court last week.

“We have deliberated in favour of the request but the Supreme Court knows what to do,” Antonio Amelia, parliament deputy speaker told reporters in the capital Maputo.

“And we believe that the Supreme Court will respect the law.”

However, opposition MPs boycotted the session on the ground that it was a ploy to block Chang’s extradition to the United States.

The US alleges that Chang had received $12 million to agree to signing a loan deal for supposedly financing a tuna-fishing fleet and maritime surveillance project.

Chang returns to court in South Africa on Thursday 31 to know the outcome of his bail application.

Another hearing session is scheduled for February 5 to determine Mozambique’s extradition request following the earlier US request.