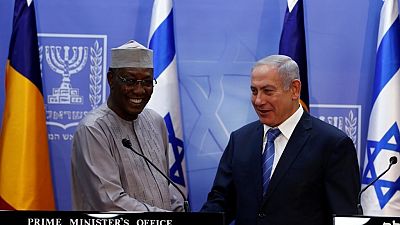 Israeli Prime Minister Benjamin Netanyahu arrived in Chad on Sunday for a visit he described as a “historic breakthrough” in this African country with a Muslim majority with which Israel is preparing to resume relations.

Netanyahu: Iran tried to stop my trip to Chad but failed https://t.co/4IONwFDPJv

Just after his arrival at N’Djamena airport, Mr. Netanyahu went directly to the presidential palace to meet with Chadian President Idriss Deby Itno. A press conference of the two leaders is scheduled for midday.

This visit is part of the revolution we are leading in the Arab and Muslim world that I promised to accomplish.

Before leaving Israel, the head of government said that the visit “to a very large Muslim country with borders with Libya and Sudan marks a historic breakthrough,” his office said in a statement.

“This visit is part of the revolution we are leading in the Arab and Muslim world that I promised to accomplish,” the Prime Minister said.

He also indicated that his visit to Chad would bring “great news”, apparently referring to a possible resumption of diplomatic relations that Chad had broken in 1972.

“All this irritates and even provokes the anger of Iran and the Palestinians who are trying to prevent it (rapprochement with Arab or Muslim countries), but they will not succeed,” Netanyahu also said.

This visit, which is scheduled to last only one day, follows President Déby’s visit to Israel in November.

Mr. Netanyahu then announced his intention to announce the restoration of diplomatic relations between Israel and Chad, a country of about 15 million people, during a forthcoming trip to N’Djamena.

Mr. Netanyahu is actively engaged in a campaign to establish or renew ties, including in Africa, with countries that refuse to recognize Israel or have distanced themselves because of the conflict with the Palestinians.

In November, Benjamin Netanyahu and Idriss Déby refused to say whether their discussions included arms agreements.

.IsraeliPM landed in N'Djamena on a historic visit to #Chad?? and has met with Chadian Foreign Minister Mahamat Zene.

In response to rebellions in the north and east of the country, the Chadian army and the National Intelligence Agency have acquired Israeli military equipment, although Chadian security sources had informed AFP.

Chad is one of the African states engaged in the fight against the jihadist organizations Boko Haram and Islamic State in West Africa. In November, it received military vehicles and ships worth $1.3 million (approximately €1.15 million) from the United States, Israel’s major ally.

The pressure of African Muslim nations, accentuated by the Arab-Israeli wars of 1967 and 1973, led a number of African states to break with the Jewish state.

But in recent years, Israel has offered opportunities for cooperation in areas ranging from security to technology and agriculture to develop its relations on the African continent.

Israeli PM netanyahu just landed in N'Djamena, #Chad. He was received by the country's foreign minister and a very modest welcoming ceremony pic.twitter.com/fTTbU7Hs0X