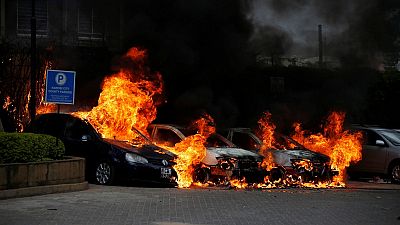 Kenyans online have called out American media outlet, the New York Times (NYT) for publishing a photo of one of the people killed in the Tuesday terror attack at a hotel in Nairobi.

The NYT article contains several images from the attack including one showing several bullet-riddled bodies slumped over tables in a restaurant.

Using the hashtags #SomeoneTellNYTimes and #deportkimiko, the angry Kenyans have issued several messages to the international community, following the attack that has so far claimed at least 14 lives.

What Kenyans are saying

The tragedy in #Nairobi today does not require nytimes sensationalized photos of bloody bullet-filled bodies slumped over laptops to be understood as horrific. We don’t show dead bloody bodies of American school children. Esp not white ones, right? #SomeoneTellNYtimes

#SomeoneTellNYtimes we do not need your sensationalized photos to “get the picture”. We have family, friends, fellow Kenyans who have lived the nightmare of terrorism. Some are gone forever. You are a disgrace. Disrespectful.

And ohh, how about a slight reminder to the New York Times & Daily Express, Nairobi is thiiiis beautiful!#SomeoneTellNYtimes#deportkimiko #ReversideAttack #Kenya #NairobiAttack pic.twitter.com/RcThCkFcZE

This is the side of #Nairobi, #magicalkenya that the international media will most definitely never report. Welcome to Kenya……… pic.twitter.com/SOUJIn4IcM

Kimiko and the NYT have since explained the ‘reasoning behind their decision’.

‘‘We understand how painful this coverage can be, and we try to be very sensitive in how we handle both words and images in these situations,’‘ read part of the NYT explanation posted on their official Twitter account.

‘‘But we also believe it is important to give our readers a clear picture of the horror of an attack like this.’‘

The photo(s) that offended the Kenyans are still included in the NYT story as of Wednesday morning.

This is The New York Times's position on why we published the photos that we did. I've deleted my earlier tweets that did not explain the reasoning behind our decision. https://t.co/kZBnaJLvqo