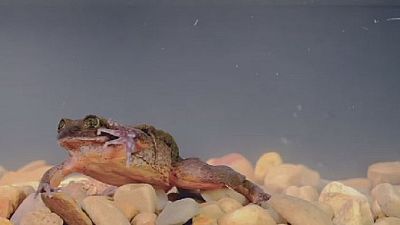 The only single and childless frog in the world has finally found a life partner.

Bolivia’s frog named Romeo has lived for almost a decade at the Natural history Museum in Cochabamba and has life expectancy of about 15 years.

Last February, he gained global fame after a dating site was set up so he can find a life partner. Global Wildlife Conservation joined force to raise funds in an attempt to explore Bolivian rivers to find him his perfect match.

If all goes well, we hope to arrange a meeting for February 14th on Valentine's Day. The idea is to find breeders for these frogs, so that they can breed and their children can return to the wild.

The expedition which begun in November last year succeeded and five other specimens were found including three males and two females.

“I put my hand in the water and started looking, then all of a sudden I caught a frog. When I raised my hand, he wasn’t a toad. I saw his orange belly, which is one of the main characteristics of the Telmatobius yuracare, the Romeo species, and I started screaming”, said Teresa Camacho Badani, Head of the Herpetology Department at the Museum.

The bride and her recently discovered relatives have been placed in quarantine in part of the museum so they can acclimatize to captivity under conditions that reproduce their natural environment.

“We found a total of five frogs, three males and a female. We chose Juliette (for Romeo) because she is the biggest. The other female is smaller, she’s still young. If all goes well, we hope to arrange a meeting for February 14th on Valentine’s Day. The idea is to find breeders for these frogs, so that they can breed and their children can return to the wild”, Teresa added.

Global Wildlife Conservation announced that it will work with the museum and other partners to collect and freeze Romeo’s sperm so they can try an In vitro fertilization.

Climate change, the destruction of their habitat, pollution and disease have drastically reduced their numbers. 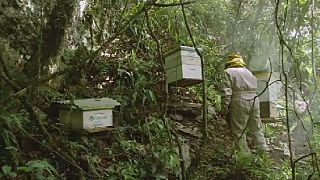