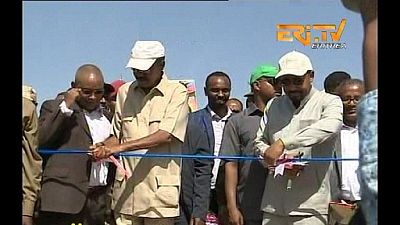 The Ethiopian Prime Minister and Eritrean President have formally opened a common border along the northern Tigray regional state.

Eritrean Information Minister, Yemane Meskel, tweeted on Monday morning that PM Abiy Ahmed and President Afwerki were to preside over the opening of the Omhager-Humera border crossing point.

The Ethiopian delegation led by Abiy Ahmed landed at Tesseney Airport for the ceremony, the Minister added.

The ceremony has since taken place with both leaders cutting a tape in the presence of officials on both sides. Also present was President of the Tigray regional state, Debretsion Ghebremicheal.

In September last year, there was symbolic reopening of border crossings between the two countries months after a peace deal that ended decades of “no peace – no war” stance.

Reuters reported in late December 2018 that a particular border crossing had been unilaterally closed by Eritrea citing especially the Zalambessa.

PM Abiy Ahmed accompanied by the presidents of Tigray and Amhara regional states landed in Tessene, Eritrea & welcomed by President Isaias Afwerki and his delegation. The visit to various sites is a strengthening of normalization of Ethio-Eritrea relations.#PMOEthiopia pic.twitter.com/goLnwfYLAD