Buhari flags off campaign as Nigeria's APC backtracks on Dangote 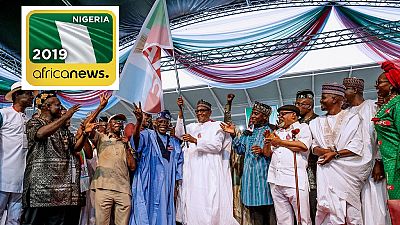 Nigeria’s presidential spokesperson has clarified that Aliko Dangote is not part of a presidential campaign council, PCC, of President Muhammadu Buhari as announced on Friday morning.

Femi Adesina was reacting to an earlier list of the PCC membership that had Dangoe, Africa’s richest man and another billionaire Femi Otedola listed along veep Yemi Osinbajo and four others.

“It has become imperative to further clarify the status of Alhaji Aliko Dangote, named under the sub-head of ADVISORY MEMBERS in the All Progressives Congress (APC) Presidential Campaign Council announced on Friday, December 28, 2018.

“Africa’s richest man, not being a card-carrying member of the APC, cannot, and is not member of the PCC. he is also a member of the Peace Committee and thus cannot be in a partisan campaign council, the statement by Adesina said.

The ruling All Progressives Congress, APC, on Friday launched their campaign for the February 2019 elections at a packed stadium in the southern Akwa Ibom State.

Buhari was joined by top officials of the APC for the flagging off of the presidential campaign in which he is seeking a second and final term in office.

He was received by the opposition state governor before he joined an estimated 30,000 people at the Goodswill Akpabio Stadium for the event. Buhari is chairman of the campaign along with a co-chair, APC national leader and former Lagos State governor, Bola Ahmed Tinubu.

The main opponent of Buhari is former veep Alhaji Atiku Abubakar who is contesting on the ticket of the Peoples Democratic Party, PDP. The party launched its campaign weeks back in the northern part of the country.