Opposition candidates in this weekend’s presidential election in Democratic Republic of Congo demanded on Tuesday that the electoral board deactivate SIM cards in voting machines to prevent the electronic transmission of results.

The opposition are up in arms because active SIM cards could allow the electoral board (CENI) to tabulate the vote electronically, despite repeated assurances the results would be based on hand counts of paper print-outs from the machines.

Disputes about the largely untested machines have stoked tensions ahead of Sunday’s long-anticipated election, which the CENI postponed from this past weekend due to delays deploying voting materials.

Seven opposition candidates, including one of the favourites in the race, Martin Fayulu, called on mobile phone operators to deactivate the SIM cards, which the CENI earlier admitted had been fitted in the machines.

At a joint news conference, the group also demanded the CENI “send a letter to these operators ordering them to deactivate these cards”.

A CENI spokesperson could not be immediately reached for comment.

On Monday, CENI president Corneille Nangaa acknowledged in an interview with France’s TV5 Monde that the machines had been fitted with SIM cards. But he insisted the machines would only be connected to the internet after the results had been announced based on a manual count.

However, four diplomats, speaking on condition of anonymity, told Reuters that the CENI had informed them that it would announce partial results within days of the vote based on electronic transmissions.

The election, which is meant to lead to Congo’s first democratic transition, was originally scheduled for November 2016 to choose a successor to President Joseph Kabila, who is barred by term limits from running after 18 years in power.

But it was repeatedly delayed due to what authorities said were logistical challenges. Opposition leaders accused Kabila of trying to cling to power, and security forces killed dozens in the protests that resulted.

Kabila is backing his former interior minister, Emmanuel Ramazani Shadary, in a field of 21 candidates, with Fayulu and another opposition leader, Felix Tshisekedi, seen as his main competitors. 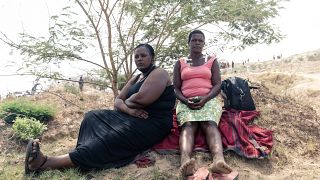