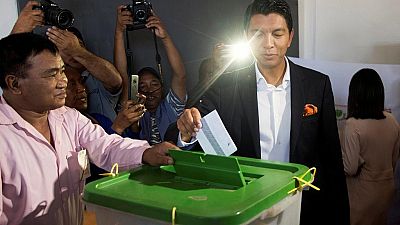 Former President Andry Rajoelina was on his way to a comfortable victory in Madagascar’s presidential election, according to provisional results, despite accusations of fraud by his rival Marc Ravalomana.

The last count published on Saturday morning by the electoral commission after counting more than 3 million ballots for an estimated turnout of less than 5 million voters credited Mr. Rajoelina with 55.11%.

Ravalomanana received 44.8% of the votes, according to these figures, which cover 60% of the country’s polling stations.

The full provisional results, before any appeals to the High Constitutional Court, should be made public by the commission around Christmas.

“We are still waiting for the full results of the commission but I believe that the current results are irreversible,” reacted one of Andry Rajoelina’s relatives, former minister Hajo Andrianainarivelo, to AFP. “Victory is ours!”

“We have heard from our representatives in the commission that the results have so far been published on the basis of the scanned minutes,” noted MP Hanitra Razafimanantso, close to Mr. Ravalomanana.

“We are asking for a comparison of the actual minutes because we suspect manipulation,” he added to AFP.

According to his team, Marc Ravalomanana was to make an official statement on Sunday evening.

For weeks, the electoral contest between the two former heads of state has been fueling tensions in the country, which has seen several political crises since its independence from France in 1960.

As early as the evening of the second round on Wednesday, the two candidates had proclaimed victory in front of their supporters as they traded accusations of fraud.

The European Union Observer Mission on Thursday commended the poll as peaceful and transparent.

“The Malagasy people voted in a peaceful atmosphere in a transparent and well organised election,” said Cristian Preda, head of the mission.

Andry Rajoelina, 44, a former advertiser and disc jockey, has a fierce rivalry with Marc Ravalomanana, 69, who has made his fortune as head of a dairy group since the 2009 crisis.

Elected president in 2002, Ravalomanana was then forced to resign in the face of a wave of violent demonstrations fomented by Rajoelina, then the newly elected mayor of the capital Antananarivo.

The latter had then been installed by the army at the head of a transitional presidency that he left in 2014.

The two men had been banned from running for the 2013 presidential election as part of an internationally endorsed post-crisis agreement.

Their campaign, which looked like a settling of scores, largely overshadowed the fundamental problems of the country, one of the poorest on the African continent. According to the World Bank, 75% of Madagascar’s 25 million inhabitants live on less than $2 a day.