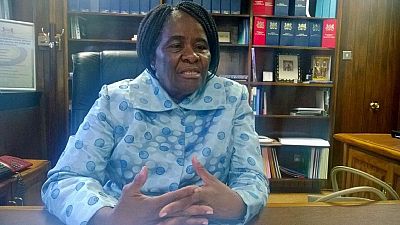 Pelonomi Venson-Moitoi, Botswana’s immediate past Minister of Local Government and Rural Development has announced that she intends to contest for the presidency.

She posted her decision on Twitter on December 18. “I hereby confirm, Yes I do intend to run,” her message read. She will be challenging President Eric Masisi for the ruling Botswana Peoples Party, BDP, ticket at the next elective congress.

Barely 24-hours later, the presidency announced that she had been dropped from cabinet and a replacement named by President Eric Masisi.

His Excellency the President has dropped Honourable Venson Moitoi from the position of Minister of Local Government and Rural Development with immediate effect.

She reacted via Twitter and stressed that she was not going back on her decision: “Yes I hear I have been dropped from cabinet. I am at peace with that. The race goes on nonetheless,” she stated.

Her replacement Frans Solomon Van Der Westhuisen, has since been sworn into office.

Venson-Moitoi was also a one-time Foreign Affairs Minister under former president Ian Khama’s government. She was also a key aspirant for the African Union, AU, chairperson race in 2016.

Khama stepped down in April for the incumbent. It is in tradition of the ruling Botswana Democratic Party, BDP, that an outgoing president steps down a year for his vice to lead the party into polls. The next elections are slated for October 2019.