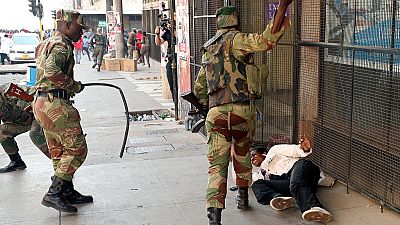 Zimbabwe’s main opposition party, the Movement for Democratic Change (MDC) has dismissed a report of the inquiry into the August 1 post-election violence that left six people dead.

The MDC, whose candidate Nelson Chamisa, contested the outcome of the election, was faulted for inflaming tensions around the election and fomenting protests that it said were pre-planned.

The inquiry led by former South African president Kgalema Motlante was investigating circumstances under which six protesters and bystanders died and dozens were injured in violence after delays in announcing results that made Emmerson Mnangagwa the first elected head of state since Robert Mugabe’s removal from power last year.

Our view is that they are trying to whitewash the August 1 event by making a false equivalence between the demonstrators and those who were shooting unarmed protesters using bullets and guns.

While the investigation found that the deployment of the army to quell protests was legal, the military’s use of live bullets to quell post-election violence in the summer was “disproportionate and unjustified”.

“The use of live ammunition directed at people, especially when they were fleeing, was clearly unjustified and disproportionate,” said the report, extracts of which Mnangagwa read to reporters on Tuesday.

While army commanders who gave testimonies during the commission hearings claimed soldiers only fired warning shots into the air, the commission concluded differently.

“The commission’s finding on a balance of probabilities from all the evidence received is that the deaths of these six people and injuries sustained by the 35 others arose from the actions of the military and the police.”

“It’s undisputed that the six people died as a result of gunshot wounds.”

The MDC immediately dismissed the report, saying Mnangagwa’s government was trying to “whitewash” the army’s actions.

“Our view is that they are trying to whitewash the August 1 event by making a false equivalence between the demonstrators and those who were shooting unarmed protesters using bullets and guns,” MDC spokesman Jacob Mafume said.
Mnangagwa has previously blamed the MDC for the post-election violence. The MDC has said its hands are clean.

The inquiry report urged the military and police to hold to account any members who may have failed to follow the chain of command when quelling the protests.

There have been no arrests for the deaths.

Mnangagwa said he would make a decision on how to proceed after studying the report.