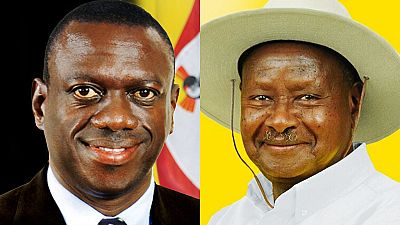 In an address to the Forum for Democratic Change (FDC) national council in Kampala on Friday, Besigye said the talks would only make sense if the discussions were about how Museveni leaves power, and paving way for a new dispensation.

“To my mind, dialogue of this political nature can be helpful, if you have struggled to a point where it becomes absolutely clear to the dictator that it’s no longer tenable to hold people captive, then we can talk about how the captor exits”, Besigye told a meeting of FDC top leadership.

To my mind, dialogue of this political nature can be helpful, if you have struggled to a point where it becomes absolutely clear to the dictator that it's no longer tenable to hold people captive, then we can talk about how the captor exits

People’s President kizzabesigye1 to FDC NC: To my mind, dilaogue of this political nature can be helpful, if you have struggled to a point where it bceomes absolutely clear to the dictator that its nolonger tenable to hold pple captive, then we can talk abt how the captor exits pic.twitter.com/XphDc9n7mM

The so-called national dialogue is an initiative of the Inter-Religious Council of Uganda, a grouping of religious institutions and the The Elders Forum, a group of eminent persons in Uganda.

Is Museveni willing to talk?

The dialogue, scheduled for 12th December in Kampala is meant to ‘kickstart a conversation aimed at solving Uganda’s political impasse’ according to its organisers. It is set to happen between political parties with representation in Uganda’s parliament.

Bu there is increasing uncertainty about the talks happening at all. While meeting with the organisers of the dialogue on November 7, the country’s Attorney general said there was no need for dialogue because ‘Uganda is a democracy with an elected government, and that there is no crisis that warrants a national dialogue’.

Mwesigwa Rukutana added that there would soon emerge another conversation in which all Ugandans would participate – the 2021 elections, local press reported.

The dialogue has been in the works since at least 2011 with organizers working to facilitate a direct meeting between Besigye and Museveni, Uganda’s key political protagonists.

Besigye has contested the presidency and lost to Museveni four times. He accuses Museveni of stealing votes on all four occasions.

In the last election held two years ago, Dr Besigye pulled huge crowds across the country and claimed, not for the first time, that the final result was rigged in favour of Mr Museveni. He declared himself winner of the election and was charged with treason. The treason trial has never taken off since.

In an effort to diffuse the tension, the Inter-Religious Council and The Elders Forum worked to facilitate a dialogue between the two men. Sweden was contacted and agreed to mediate the talks.

Besigye and Museveni are former bush-war comrades. The former, a retired army colonel and medical doctor left the government and run for president for the first time in 2001.

A memorandum of understanding was signed and local newspapers reported then that Museveni appeared prepared to talk with Besigye and even seemed prepared to make some concessions.

Besigye, on his part, remained wary of Mr Museveni’s moves and insisted on an institutionalized dialogue that would involve a broad spectrum of players, including political parties, and not just him speaking with Mr Museveni.
He also demanded what he called an international, independent audit of the 2016 election. He insists that he won the race with 52% of the vote.

Museveni, in power since 1986, has vowed on several occasions to ‘crush’ the opposition. Members of the opposition opposed to the dialogue say the government only wants the process to please donors and cleanse its battered image, especially after coming under intense criticism recently for allegedly torturing opposition legislator, Kyagulanyi Ssentamu.

So far, only three small political parties have expressed willingness to participate in the dialogue. The FDC is Uganda’s main opposition party.