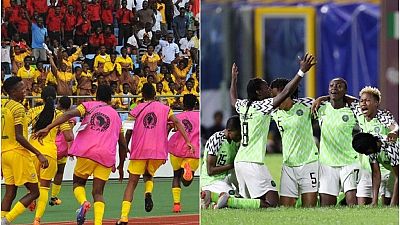 Banyana Banyana, who have impressed throughout the tournament overcame Mali in the semi-final, putting two unanswered goals past the Female Eagles.

In the other semi-final, Nigeria and Cameroon played out a goalless draw, including a barren period of extra time. The defending champions went on to win the resulting penalty shootout (4-2).

We will celebrate tonight and start preparing for the final.

Nigeria are the record holders of the women’s football tournament, having won the first seven editions.

READ MORE: Everything you need to know about Africa Women’s Cup of Nations (AWCON 2018)

AWCON 2018 also acts as the African qualifiers to the 2019 FIFA Women’s World Cup. Nigeri and South Africa thereby confirmed their slots at the tournament which will take place in France.

South Africa will be featuring at the World Cup for the first time, while Nigeria have been to every World Cup since 1991.

The third place match between Cameroon and Mali on Friday, will also determine the final African representative for the FIFA Women’s World Cup.

Nigeria, who are the team to beat in women’s football, will be seeking revenge against the South Africans who stunned them (1-0) in their opening game at AWCON 2018.

‘‘For now we celebrate and prepare for the final match on Saturday…now that we have that out of the way, the next target is retaining the trophy,’‘ said Nigeria’s coach, Thomas Dennerby.

Super Falcons Victory Dance After The With Cameroun. pic.twitter.com/bNKrkMLyHY

‘‘We will celebrate tonight and start preparing for the final. We have never won the Women’s AFCON and we are going to give it shot and see what happens on the weekend,’‘ said coach Desiree Ellis of the Banyana Banyana.