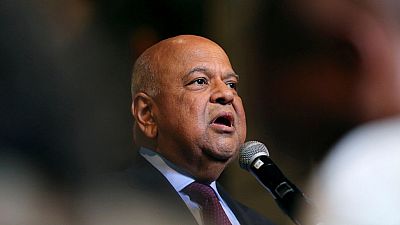 Malema, who leads the Economic Freedom Fighters (EFF) party, protested outside an ongoing corruption inquiry where Gordhan was giving evidence last week, accusing the minister of being “corrupt” and “a dog”.

Gordhan filed a complaint of crimen injuria and criminal defamation, in addition to seeking an apology from Malema and his deputy Floyd Shivambu, as well as damages of 150,000 rand ($11,000).

Crimen injuria is an act of unlawfully, intentionally and seriously impairing the dignity of another.

He accused Malema of defamation and inciting public violence and said it was now up to police officers to investigate.

“This combination of the attack on one’s dignity, the attack on society more generally, propagating hate in society has to be stopped,” added Gordhan.

EFF says it will sue Gordhan

The EFF responded swiftly, declaring it will on Tuesday open a case of corruption against the former finance minister.

Malema last week said Gordhan’s daughter Anisha was awarded government contracts as a result of her father’s position in government.

Gordhan was finance minister before he was abruptly fired by former president Jacob Zuma in March 2017 and is now the minister of state-owned companies.

He was seen as a bulwark against corruption in Zuma’s government and was one of the few minister’s in Zuma’s cabinet who were strongly defended by the EFF.

Gordhan also pointed out that the EFF’s tactics might be designed to distract the public’s attention from the scandal where the party and its leaders are accused of looting the pro-poor, black VBS Mutual bank.

Gordan who last week gave evidence to the commission probing graft under Zuma, has estimated that around 100 billion rand ($7 billion, 6.2 billion euros) may have been stolen through corrupt government tenders.

The commission, which opened in August, is probing allegations Zuma organised a web of graft at government departments and public enterprises in a scandal known as “state capture”.

Zuma was forced to resign in February over allegations centering around the Guptas, a wealthy Indian migrant business family at the heart of the scandal.

The country’s anti-corruption ombudsman said in a report the Guptas held such sway that they chose some of Zuma’s cabinet ministers and they are accused of fraudulently profiting from vast government contracts.