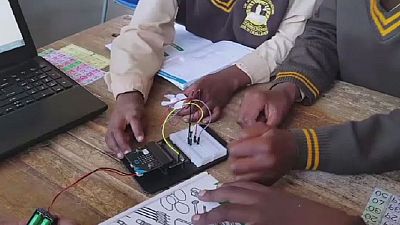 Its a Wednesday 2pm class in the densely populated township of Ivory Park, on the outskirts of the South African city of Midrand, it’s time for some eleven-year-olds to compete in their local computer coding club.

Children use electronic boards to make circuits and prototypes, striving to design technological solutions to solve problems they have identified in their community.

As education evolves, children have to change with it. And in education now ... programming is the future. So we have to prepare the children, educate them for the fourth industrial revolution

Coding is the set of instructions that a robot or computer program reads and then executes. In coding clubs, students learn to design these codes.

In South Africa, most coding clubs are hosted free of charge by NGOs such as ORT-SA, CodeJika and We Think Code.

However, in September, the Ministry of Education announced that it would support clubs, which are also popular in other African countries such as Kenya and Botswana.