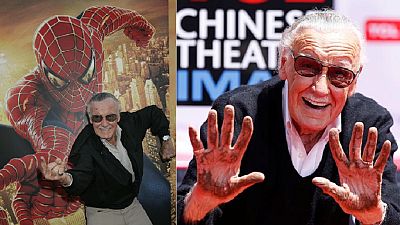 Stan Lee, who dreamed up Spider-Man, Iron Man, the Hulk, Black Panther and a cavalcade of other Marvel Comics superheroes that became mythic figures in pop culture with soaring success at the movie box office, died at the age of 95, his daughter said on Monday.

As a writer and editor, Lee was key to the ascension of Marvel into a comic book titan in the 1960s when, in collaboration with artists such as Jack Kirby and Steve Ditko, he created superheroes who would enthrall generations of young readers.

“He felt an obligation to his fans to keep creating,” his daughter J.C. Lee said in a statement to Reuters. “He loved his life and he loved what he did for a living. His family loved him and his fans loved him. He was irreplaceable.”

She did not mention the circumstances of Lee’s death but the celebrity news website TMZ said an ambulance was called to his Hollywood Hills home early Monday and that he died at Cedars-Sinai Medical Center.

“Stan Lee was as extraordinary as the characters he created,” Bob Iger, Chairman and CEO of The Walt Disney Co, said in a statement. “The scale of his imagination was only exceeded by the size of his heart.”

Disney bought Marvel Entertainment in 2009 for $4 billion to expand Disney’s roster of characters, with the most iconic ones having been Lee’s handiwork.

Lee was known for his cameo roles in most Marvel films, pulling a girl away from falling debris in 2002’s “Spider-Man” and serving as an emcee at a strip club in 2016’s “Deadpool.” In the 2018 box-office hit “Black Panther,” which featured Lee’s leading black superhero, he was a casino patron.

“There will never be another Stan Lee,” said Chris Evans, who starred as Captain America in Marvel movies. “For decades he provided both young and old with adventure, escape, comfort, confidence, inspiration, strength, friendship and joy.”

Americans were familiar with superheroes before Lee, in part thanks to the 1938 launch of Superman by Detective Comics, the company that would become DC Comics, Marvel’s archrival.

Lee was widely credited with adding a new layer of complexity and humanity to superheroes. His characters were not made of stone – even if they appeared to have been chiseled from granite. They had love and money worries and endured tragic flaws or feelings of insecurity.