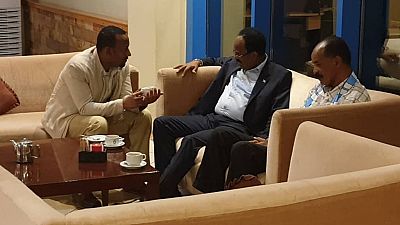 Ethiopian Prime Minister and his colleague leaders of government from Eritrea and Somalia started their trilateral meeting on Friday after a busy schedule visiting projects in the Amhara regional state.

According to Abiy’s office, the discussions with Eritrea’s Isaias Afwerki and Somalia’s Mohammed Abdullahi Farmaajo were based on three broad areas.

“The tripartite discussions have continued, focused on regional economic integration; strengthening peace and security in the Horn region, and on developing a common and aligned voice on international agendas,” the PM’s office said in a tweet.

Friday’s meeting is to be continued with talks slated for later today, the office added. The leaders were shown in photographs in a rather informal setting engaging in discussions. A communique is expected to be issued at the end of the summit.

The meeting is the second leg of the trilateral summit. The first was in Asmara in September this year. Countries in the region had been at loggerheads of different issues over decades.

The most protracted of the spats being that between Ethiopia and Eritrea. With the signing of a peace deal between the two countries in July this year, a number of the issues have since been settled.

The case of Somalia and Eritrea was also settled in September on the sidelines of the trilateral summit in Asmara, whiles Eritrea’s issues with Djibouti is also on the way to resolution as Afwerki for the first time in a long while met his counterpart Omar Guelleh in Riyadh, Saudi Arabia.