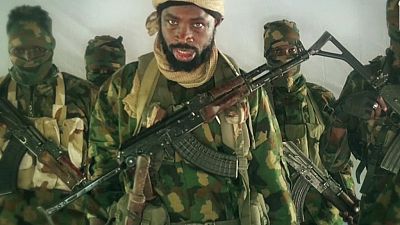 Factional leader of Nigeria’s insurgent group, Abubakar Shekau, has appeared in a new video mocking at authorities who have in the past reported that he had been killed even at times that he had died.

Shekau who is described as leader of the Jama’atu Ahlil Summah Lil Da’awatu Wal Jihad, a faction of Boko Haram in the seven-minutes video praised fighters of the group who he said had been gaining grounds on the Nigerian army.

Speaking in the widely spoken Hausa language, a seemingly healthy and upstanding Shekau flanked by armed masked men listed the attacks in Kumshe, Gulumba and other areas in the northeastern Borno State.

“It is not anyone, it still me. The very one known as Abubakar Shekau. Those that proclaimed my death, have woken up to nothing. Those that spoke about rifts with my mother, God is the All-Knowing.

“God is the All-Knowing, but if you are truly just person, truly in search of truth, you would have gone to seek answers but not to sit aside and peddle speculations about us,” he said in Hausa.

The said video was released by Ahmed Salkida, a Nigerian journalist who extensively covers the Boko Haram crisis. Shekau with his huge tooth stick in hand claimed that his troops were behind recent attacks.

The last time he appeared in a video was in July 2018 seated with masked soldiers but less combative as he appeared in the current video. The Nigerian Army has recently had a hard time containing attacks by the group.

Abubakar Shekau appeared in combat gear in a new video, different from his wobbly appearance in white robe from his July, 2018 video. Was he ill, then? Has he fully recovered? Is he trying to appear as strong as ISWAP? pic.twitter.com/oACI1HjTGu