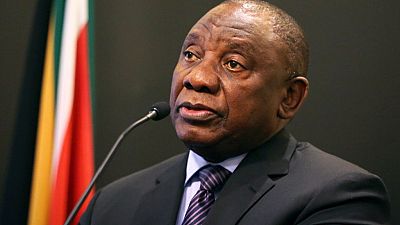 South Africa’s president Cyril Ramaphosa on Tuesday appealed to the nation to resist racist sentiments, following a brawl in parliament over the rights of white legislators to make submissions.

Ramaphosa was addressing parliament to deliver an update on progress made to revive the economy, as well as the fight against crime.

His question and answer session was however interrupted by a flurry of fists and insults between legislators of the opposition parties, Economic Freedom Fighters (EFF) and Democratic Alliance (DA).

There should never be a time or an opportunity where we see each other as black, white and so forth and insult one another.

Agang SA legislator Andries Tlouamma was physically attacked by the EFF’s Nazier Paulsen after he defended the right of white people to participate in the sesion.

Speaking after the fighting had ended, Ramaphosa said the country can not afford to return to the raw racism of its apartheid past.

“There should never be a time or an opportunity where we see each other as black, white and so forth and insult one another,’‘ Ramaphosa said.

‘‘We are South Africans, and this is what defines us.”

Racial tensions in the country have been heightened by the EFF and ruling party’s backing of the policy of redistributing land to black people.

“We cannot go back to that horrible past that we have had. We are a non-racial democracy. And however painful it might be and we still live with the pain that apartheid did we cannot revert to raw racism and separation of ourselves,’‘ the president added.

Ramaphosa’s African National Congress (ANC) plans to change the constitution to allow for land expropriation without compensation to address racial disparities in land ownership that persist more than two decades after apartheid’s demise in 1994.

One knows South Africa has unacceptable levels of violence, but if the people’s elected representatives paid more than R1m each cannot have rational debate without resorting to verbal & physical violence, what hope? #Parliament is not #Fightclub.#SAPolitics2018 #ToxicMasculinity pic.twitter.com/uGGc6zAEjR

Honestly putting the DA and the EFF next to each other at parliament always results in a shit show why can’t they change the seating? #SouthAfrica

It’s not only you who makes a mockery of parliament, the position you hold & the good people of South Africa. This conduct embarrasses our nation on a global political platform. It’s time to step down for one simple reason:You lack the qualities necessary for leadership.

Absolutely shocking scenes from Parliament. These thugs, thieves and race peddlers are a reflection of a broken country. South Africa has failed because it was built upon slogans like “ the rainbow nation” instead of Judeo-Christian values and meaningful reconciliation.