DRC Elections: Tshibala, Florent , 500 others mobilized for a majority campaign 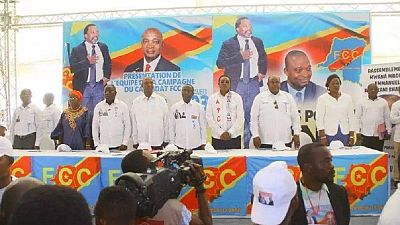 The majority in power in the Democratic Republic of the Congo on Saturday in the capital, Kinshasa unveiled their campaign team for its presidential candidate of December 23. Emmanuel Ramazani , and 500 others, composed of politicians and opinion leaders.

Prime Minister Bruno Tshibala and all members of the government are part of the team of more than 500 people included are the President of the National Assembly and the Director of President Joseph Kabila’s cabinet.

The Congolese Minister of Interior, Henri Mova, is in charge of securing the candidate and the electoral and will be assisted by the former Chief of Staff of the Congolese army, General Didier Etumba.

The selection of members took into account the country's 26 provinces and 145 territories, political parties and groups, civil society organizations.

Communication will be coordinated by Lambert Mende, Minister of Media in the Congolese government. The sister and brother of the President of the Republic, Jaynet and Zoé Kabila, hold key positions (finance and youth) on the campaign team.

The coach of the Leopards, the DRC’s national football team, Florent Ibenge, is in charge of the sports unit. Katebe Katoto, brother of the exiled opponent Moses Katumbi, is in charge of managing the business community.

Musicians, artists, pastors of evangelical churches, members of the associative world are also part of the team.

“The selection of members took into account the country’s 26 provinces and 145 territories, political parties and groups, civil society organizations,” explained a leader of the Common Front for Congo (FCC) during a ceremony at a hotel in Kinshasa.

In the provinces, the campaign of the candidate, Emmanuel Ramazani will be coordinated by provincial governors, members of the FCC, it was noted.

“An election victory is a matter of organization,” insisted André-Alain Atundu, spokesman for the majority.

The election campaign will be officially opened from November 22 to December 21.

Former DRC Interior Minister Emmanuel Ramazani was nominated as a majority candidate by President Joseph Kabila on August 8, the last day of the presidential, national and provincial legislative elections.

Postponed to 2016 and 2017, the elections are scheduled for December 23 2018. Twenty-one candidates, including two opposition leaders, are in the running for the presidential elections, meant to produce the succession of President Kabila after 18 years of reign.