Head of Ghana's protest-hit varsity asked to step aside 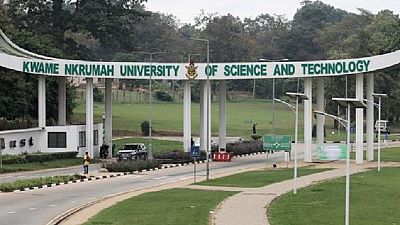 The government of Ghana has asked Prof. Obiri Danso, the vice chancellor of a protest-hit university, to step aside as plans continue to find a resolution to a student-administration clash.

The Kwame Nkrumah University of Science and Technology, KNUST, was closed down indefinitely after security personnel were deployed to quell violent protests by students of the university located in the Ashanti regional capital, Kumasi.

An Education Ministry spokesperson confirmed to the local Citi FM radio station that the vice chancellor had been asked to hand over to the pro vice chancellor.

BREAKING NEWS: The VC of KNUST, Prof. Obiri Danso has been asked to step aside. #JoySMS pic.twitter.com/MnXyA1kOSp

The ‘step aside’ order had been communicated by the National Council of Tertiary Education, NCTE, but the official confirmed that it was a government call.

“The decision for the KNUST VC to hand over is the government’s call, the NCTE just communicated the decision,” Rodney Nkrumah Boateng said. He also disclosed that the sector minister was set to meet lecturers’ group that had embarked on a strike.

The university’s council was dissolved last week and a temporary body put in place with the mandate to reopen the school in two weeks. Incidentally, the embattled vice chancellor was omitted from the interim council.

In the wake of alleged police brutality and maladministration, students went on a planned protest which led to vandalizing of vehicles and parts of the varsity’s administration block. Eleven students were arrested in a police raid late last week on charges of illegal assembly and violent behaviour.