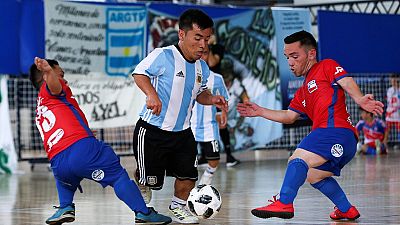 Argentina has played host to teams of little people across the Americas as they compete on seven soccer matches.

It is the first-ever global soccer tournament for little people.

Morocco is on a special invitation joining teams from Chile, Colombia, Argentina, Brazil, Peru and Bolivia.

Treat everybody the way you'd want to be treated. We all can shine in our own light if given the opportunity.

“You know, it’s just giving everyone a chance whether they’re little or any kind of a challenge whether they’re blind or deaf or… You know, treat everybody the way you’d want to be treated. We all can shine in our own light if given the opportunity’‘, said Martin Klebba, Team United States-Canada member.

Facundo Rojas is a member of Team Argentina Captain.

“It gives us the chance to show the world who we are and what we’re made of and what we can do. It’s important to note that we represent one of the disabilities that is most discriminated against on a world level and the main goal is that, to bring awareness, respect and most of all, peace”, Rojas said.

And it was a pretty proud moment for some parents.

“It’s beautiful to be able to give them a different life, help them in all their dreams, help them get away from feeling ostracized, which is the only way some of them live because they feel ashamed” said Rojas’ mother, Silvia Munoz.

Players are hoping the platform would help bring more awareness and respect to people of short stature.

The winning team will be crowned at the tournament’s final in Buenos Aires on Sunday.